From Finnish Free-Form Fluidity to Natural Swedish Simplicity, our resident design Experts Charlotte and Peter Fiell pick out eleven of their favourite items from their latest book for LKP – the striking Modern Scandinavian Design

Over the years, we’ve spent a lot of time in Scandinavia, both on holidays and on research trips, and with each and every visit we’ve been astonished by the rich yet distinctive design cultures that each of the five Nordic nations enjoy. Indeed, for those lucky enough to live in Scandinavia, good design is quite simply a way of life, with well-designed everyday things being considered the birthright of all. It was this shared ethos of life-enhancing design excellence that ultimately motivated us to write our recently published book, Modern Scandinavian Design. Featuring over 1200 different designs, this richly illustrated and comprehensive volume is broken down into twelve chapters dedicated to the various design disciplines, from architecture to graphics. So here is a round up of our absolute personal favourites from each of the book’s chapters:

This proto-Brutalist reinforced concrete Lutheran church is set in the very heart of Iceland’s windswept capital. It is the ultimate Nordic ‘space cathedral’ with its remarkable stepped form soaring heavenwards, and its bell-tower affording spectacular if usually quite windy views over the surrounding cityscape. The most astounding thing, however, is its original date of design: 1937, which testifies to Samúelsson’s forward-looking approach to the use of concrete as a building material. 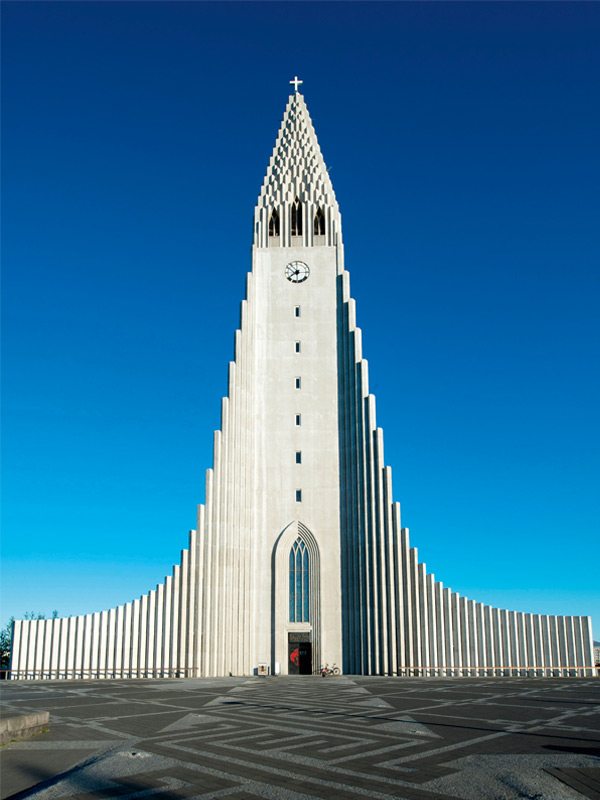 The culmination of years of research, the Panton chair was the world’s first single-material, single-form chair to be produced in injection-moulded plastic, which had been the holy grail of chair design throughout the late 1950s and 1960s. This sculptural S-shaped cantilevered chair marked, however, not only a revolutionary milestone in seating design, but Nordic design, too. Indeed, for many years after its launch Panton was pretty much considered ‘top-shelf material’ among the Danish design community because he had broken with its long-held solid hardwood cabinet-making tradition and irreverently ignored its quest for ideal forms based on historical archetypes. 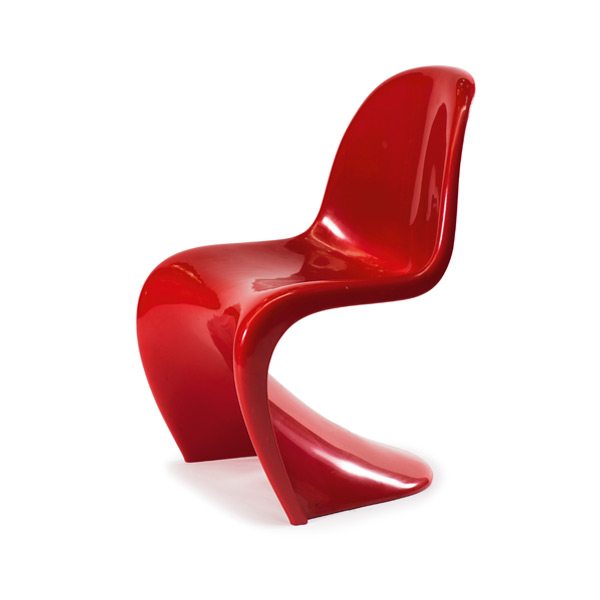 Taking a scientific approach to lighting, Poul Henningsen spent some 30 years researching the physics behind the diffusion of light. This ultimately allowed him to create a series of multi-shaded pendant lamps that were light years ahead of other lighting designs then on the market. The best known of these is the Artichoke, created originally for the Langeline Pavilion in Copenhagen in 1957. With its striking sculptural presence, this remarkable assemblage of carefully positioned copper ‘leaves’ gives any room not only a warming hygge-style glow, but also a nostaglic Contemporary Modern aesthetic. 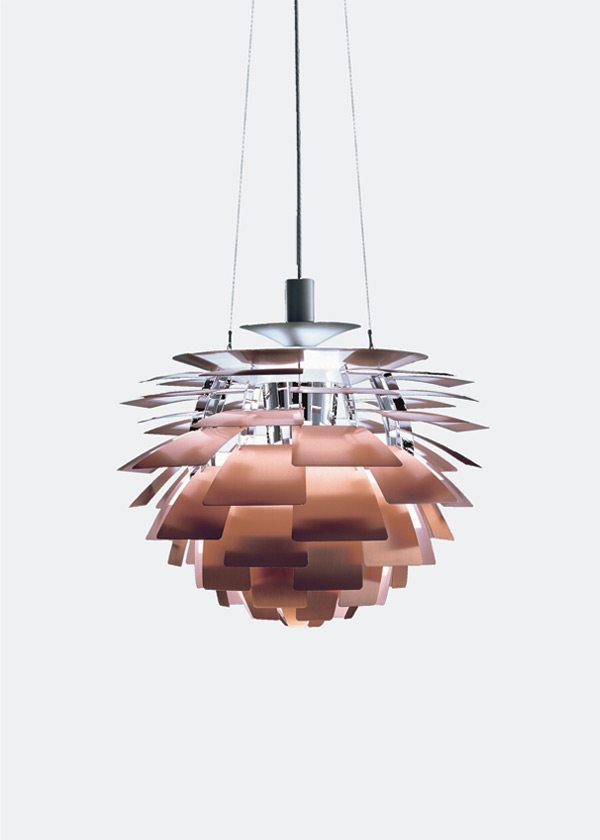 It is difficult to get one’s head around the fact that the Aalto vase was first designed 81 years ago. Indeed, it is such a familiar design icon that it is difficult to appreciate what a radical  design it must have seemed when it was first exhibited at the Paris World Fair of 1937. With its iconic free-form outline, so instantly recognizable, the Aalto vase encapsulates the abstract essence of nature probably better than any other glass object. Crucially, Aalto never called it a ‘vase’ because he didn’t want to be prescriptive in how this ‘object’ should be used – he wanted to leave that up to the user’s creative imagination. 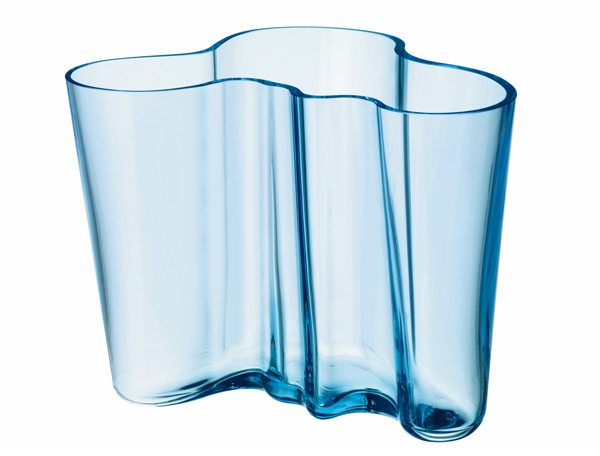 The creative genius Stig Lindberg worked in a wide variety of design disciplines, from glassware and product design to textiles and graphic design. His work was also stylistically broad, ranging from highly decorated designs to pieces that had a remarkable sculptural purity. His Berså dinnerware is, however, his most famous design, and not without good cause. It possesses a wonderful uplifting quality with its eye-catching, highly stylized leaf motif reflecting the Scandinavian love of simplicity and of nature. 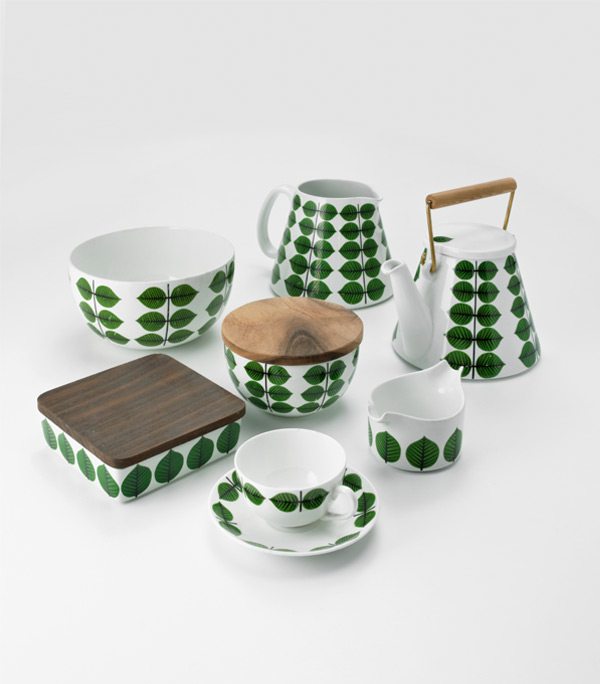 In the 1950s a stainless-steel revolution occurred in homeware design that was spearheaded by a number of Scandinavian companies and designers. At the forefront was the Swedish designer, Pierre Forssell, who produced product designs for Gense, including these canapé dishes with their crisp contemporary lines. Affordable yet stylish, these New Look serving dishes creatively exploited the mass-manufacturing potential of stainless steel, while also perfectly expressing the innate properties of this hard, shiny and durable ‘new’ wonder material. 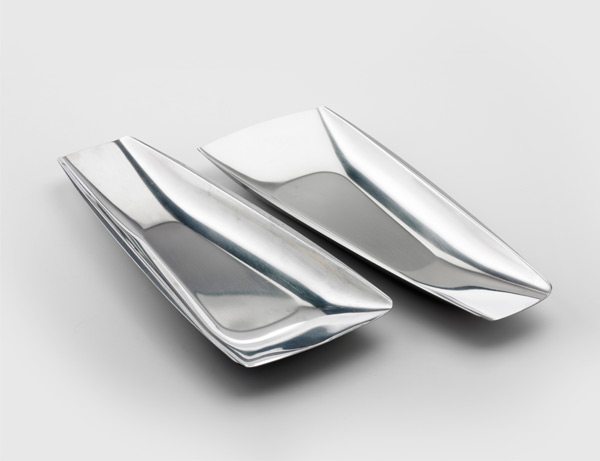 Over the decades Jens Quistgaard created hundreds of designs for Dansk, of which his teak pieces are the best known. With its staved construction inspired by Viking ships, and its handle reminiscent of those found on traditional Japanese buckets, Quistgaard’s ice bucket of 1960 embodied the core attributes of Danish Modernism: beautiful craftsmanship twinned with an ideal form. It also reflected, Quistgaard’s lifelong goal in design: ‘Simplicity without poorness’. 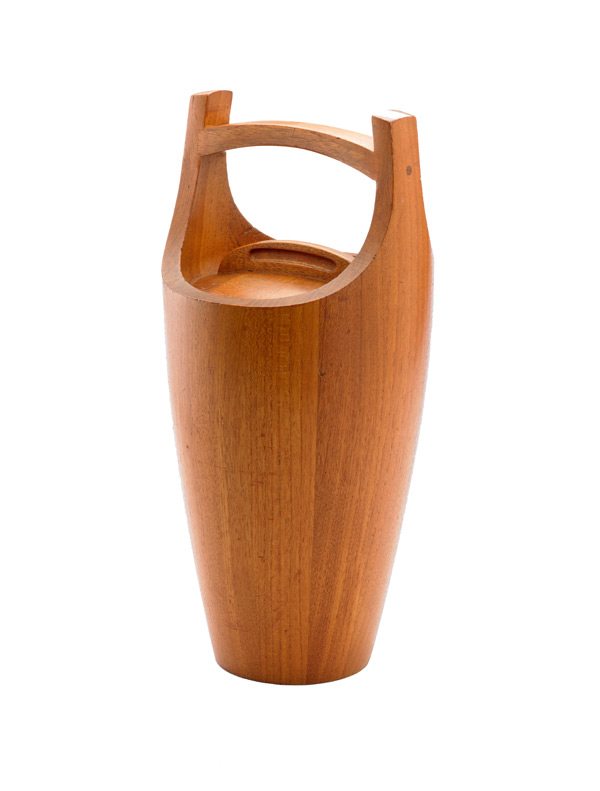 Kanna watering can by Carl-Arne Breger for Gustavsberg (Sweden), 1957–58

The Swedish designer Carl-Arne Breger was one of the great pioneers of plastics design during the 1950s and 1960s, with his Kanna watering can (1957–58) perfectly demonstrating how newly introduced polymers could be employed to create sculptural yet functional forms. Crucially, this early design helped Breger to forge a reputation as a specialist in this new and emerging field, and he subsequently created many other plastic household products of organic form. In fact, he was so closely identified with this area of design that he became widely known in Scandinavia as ‘Mr. Plastic’. 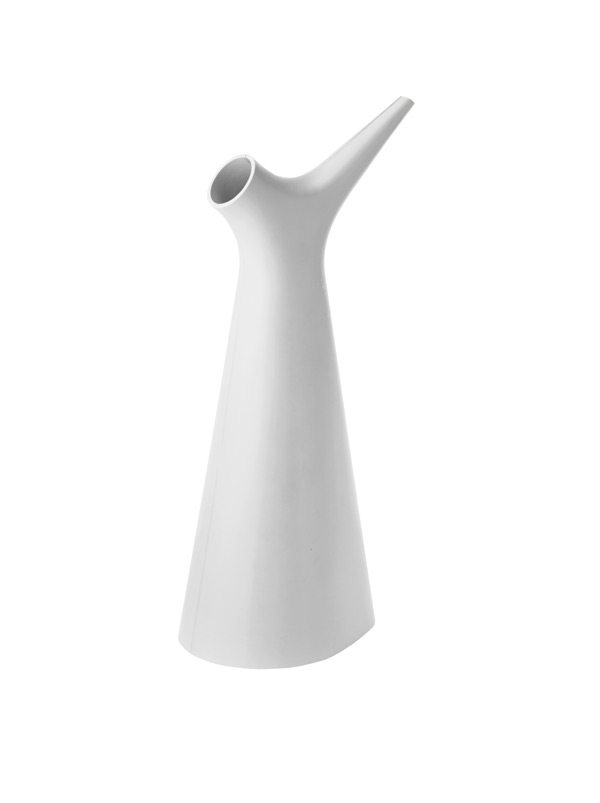 Maija Isola designed a number of iconic textile patterns that perfectly captured the youthful and optimistic spirit of the 1960s Golden Age of Scandinavian design. It was, however, her Kaivo (Well) textile, launched in 1964, that was undoubtedly the most significant design she ever created, because it boldly unleashed a new era of extra-large patterned textiles the like of which had never been seen before. It was part of her revolutionary Arkkitehi (Architects) series for Marimekko, which was specifically conceived as a means of encouraging architects and interior designers to use large-scale textile hangings in public and commercial buildings. 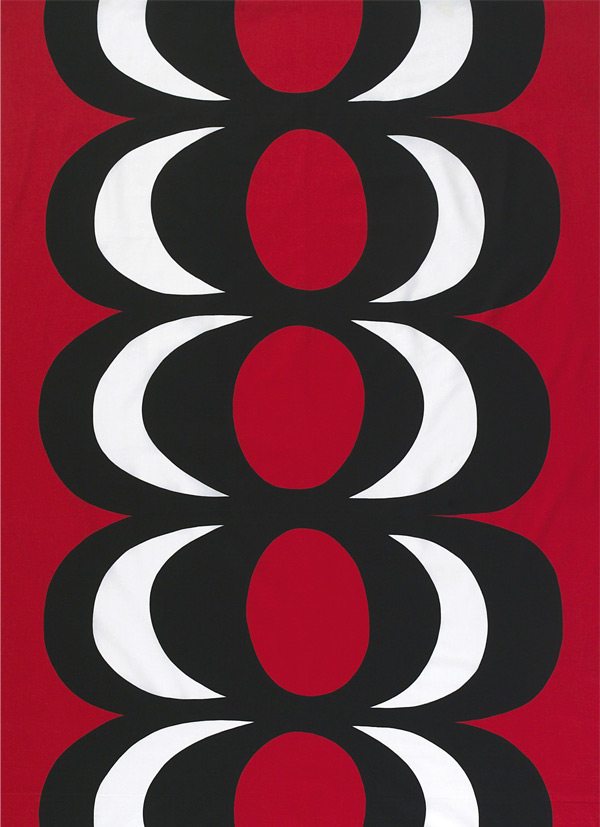 Spirit of the Frozen North

Drawing inspiration from the natural world, Björn Weckström has during his long career produced an impressive body of jewellery designs with a raw, sculptural, almost Brutalist aesthetic. Regarding his designs as ‘sculptures in miniature’, he tries through them to evoke a sense of ‘complete landscape’. His Planetoid Valleys necklace (1969), which was famously worn by Princess Leia in the first Star Wars film (1977), is a perfect example of this rare ability to capture the ruggedness and beauty of the far North. 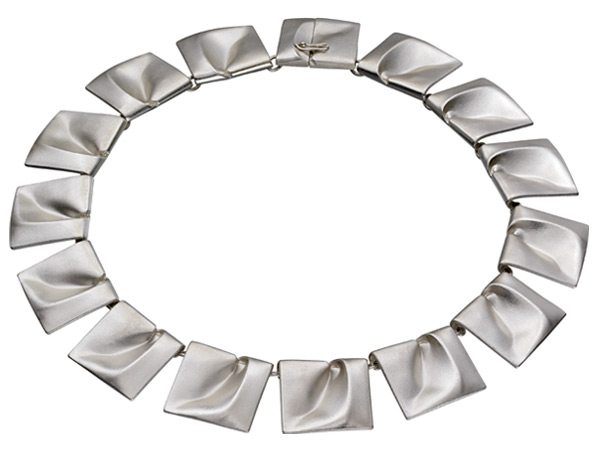 As an antidote to the pervasive slickness of so much commercial graphic design, there are a number of world-class creative agencies in Scandinavia that are currently producing work that is of a more illustrative nature or that references handcraft skills. Fellow Designers’ clever Stockholm subway map is a perfect example of this new millennial wave of Nordic visual communications, with its a light-hearted poetic sweetness paying homage to the rich folk traditions of the Nordic region. But over and above this, it also reflects the increasing desire for culture-specific authenticity that we can all connect with on an emotional level. 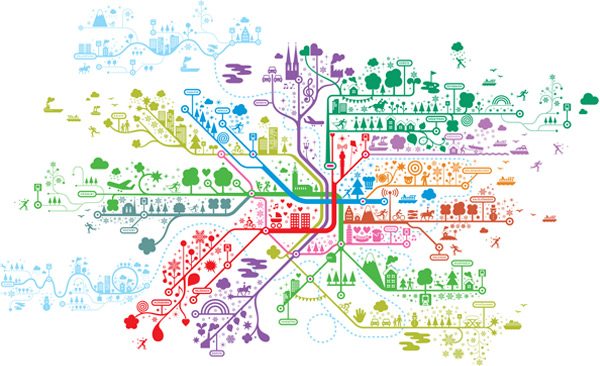 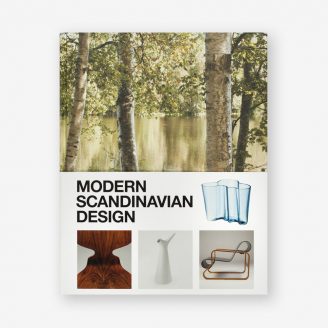