How did the project first come about?

I was contacted by Laurence King Publishing, they told me they had a new idea for a storytelling game, that would perfectly suit my style of illustration. After a meeting, I realised quite early on that the project was a great opportunity to work on something that didn’t have a pre-disposed story outlined for me to illustrate, rather i could create and imagine stories which took their own path. This was very exciting, and i jumped at the chance.

Did you know anything about myrioramas before you started on Hollow Woods? How did you go about researching them?

I had seen an old Victorian Myriorama in one of those strange town museums you get in England, everything was dusty and misplaced, but the Myriorama really stood out. A beautifully drawn flowing landscape, which could be rearranged indefinitely.

I took to researching, but found little available, so simple took the basic premise and worked out the formula, and jumped in.

How did you start, with a blank screen or a blank piece of paper?

Everything begins with sketches, I did quite a few drawings, to try and work out where the best places to put the matching points from card to card would be. Because I wanted details up front and in the distance, i chose to use a foreground point, a mid ground, and background, as the lines that would flow from one to the next. I’m lucky that nature is so random, it meant I could use branches or bushes to make transitions easier. 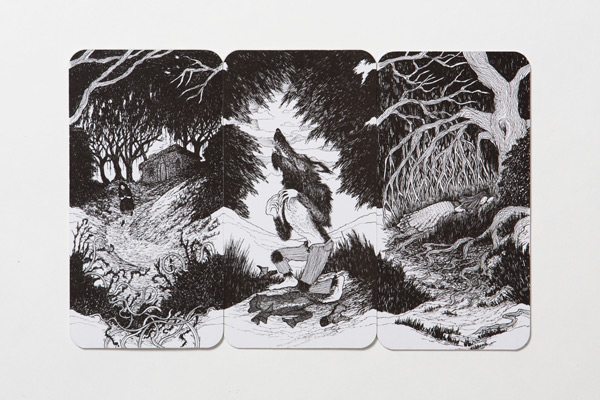 What’s the biggest challenge when creating a myriorama?

Once you work out your fixed flow points, the main difficulty is in creating an image that survives alone, and is suggestive of a continuing theme or story. Usually my illustrations relate directly to text, there is a limited amount that I can put in an image, a beginning and an end. But with a storytelling Myriorama each image is a fixed point in an ever-evolving story, and every move before and after can change. In that way I guess I had to draw a definite ambiguity, which was a new challenge for me.

Is there any room for spontaneity or does everything need to be carefully planned out?

I worked to a list of details that could be useful in creating a narrative, sometimes places, objects or characters, sometimes more than one per card. There are definitely elements that we all know and love, but then there are things that simple appear strange and intriguing, to further spark the imagination. This means that the storytelling is pushed to make altogether new imaginings, even if they think they know the story, suddenly they are faced with a twist in the tale, that has never been told before. That’s what makes this really fun. For example, a werewolf would never be expected to wake a sleeping beauty before being crushed by a giants foot, this game has such a great scope for imaginative storytelling. It reminds me of the David Bowie Lyrics method, he would write different words on small pieces of paper, and pick them at random, and then form lyrics from them. Its a way of unlocking the mind to new possibilities outside of the constraints of the known and expected. 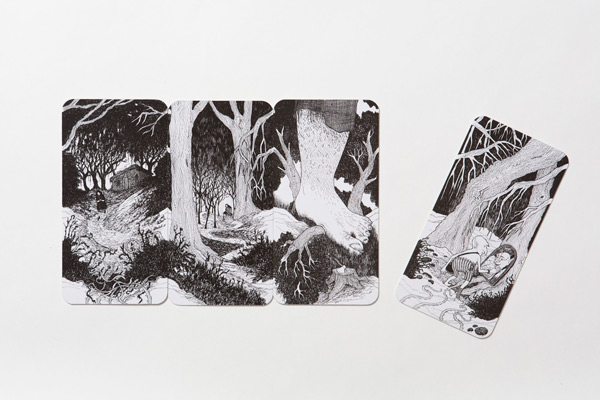 When did your love affair with black and white begin? Is it limited to your illustrations, or does it extend to your life outside of work?

My Aunty used to have some Aubrey Beardsley works in her downstairs lavatory, and I was enthralled. I did a thesis on him, and without really thinking about, began working in black and white. I find the restrictions of the medium force me to work harder to create, there’s no free ticket to get out of a difficult situation, I have to invent new methods of description with just a black pen. It’s also important that my work is understood to be hand drawn, with no trickery, just the craft.

Creatures (and creepy crawlies) seem to feature heavily in your work – have you got any pets?

I have two wonderful Maine Coon cats, brothers, Dollar and Dallas, whose antics are being noted, and may lead to a series of children’s books in the near future. They are a pair of beautiful rescue cats, that have cost the earth in vets bills, but are very much loved.

Myrioramas are based on the art of storytelling, which books left a big impression on you as a child?

I’m a huge fan of Jules Verne, Charles Dickens, and Robert Louis Stevenson, but as a child, like most Roald Dahl was my world, I would imagine that I lived in his books, because everything was so much more fantastic there.

Row of cards from The Hollow Woods, Storytelling Card Game, 2017

Music is obviously a big part of your life, what do you like to listen to while you’re working?

This may come as a surprise, as although I did play guitar in a mildly successful rock band for 15 years, I cannot listen to music while work. I think I find it too engaging, emotionally, and when I draw, I need to feel the characters I’m drawing, or the environment I’m creating. Instead, I listen to audiobooks, and more embarrassingly my list of titles is really quite small. I repeat the same books over and over during any particular project. I think I get used to the sound of the voices, and this comfort allows me to work long hours alone in my studio, without feeling the need for company. Sad I know, but whatever works!

If you could be an illustrator in residence anywhere in the world, where would you choose to be based?

I think South America has appealed to me for a long time now, its vibrancy and life, nature, landscapes and chaotic cities, it’s a million miles away from the polished streets of London, and I’d love to drink it all in and see what came out of my pen.

What’s next for you?

I’ve just finished work on the new Dr Who Hardback, which I’m very pleased with, currently working on a children’s book for the US market, which deals with childhood depression, which is proving to be one of the hardest projects of my life.

I’m also currently working on a gallery show of large scale works which have no basis in text what so ever, so I guess they would instead be called art, which is very exciting. 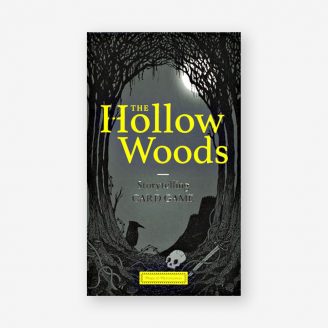