Informed as they are by the writings of Aesop and Ovid, there’s a strong element of faerie about the human-animal hybrid creations of Nicola Hicks. But there’s nothing fey about these savage, club-wielding bankers and clapped-out old circus horses. Robert Shore enters the artist’s fierce, mythical world.

“Do you want to know about the clapped-out old circus horse?” says Nicola Hicks, her pug at her heels, as she leads me towards one of the straw-and-plaster sculptures-in-progress in her studio. “That’s me. Ribs are sticking out, knees hurt a bit, still wearing a red feather, still making an effort, still keeping going, still questing out a bit. I just wanted to make that feeling of – you breathe in and your ribs rattle a bit. She’s still trying, she’s still there, she’s still bothering to put the red feathers in but actually it’s a different kind of life.”

For the past four decades Hicks’s practice has revolved around her extraordinarily lifelike portraits of humanized animals and mythic, beastlike humans. It’s been said that she works in the tradition of unrepentant twentieth-century British representation that runs from Stanley Spencer to David Hockney, but her figures are infused with powerfully personal emotion and inhabit a highly distinctive animistic world of perpetual woodland twilight. She’s the Ted Hughes or Kate Bush of British sculpture. 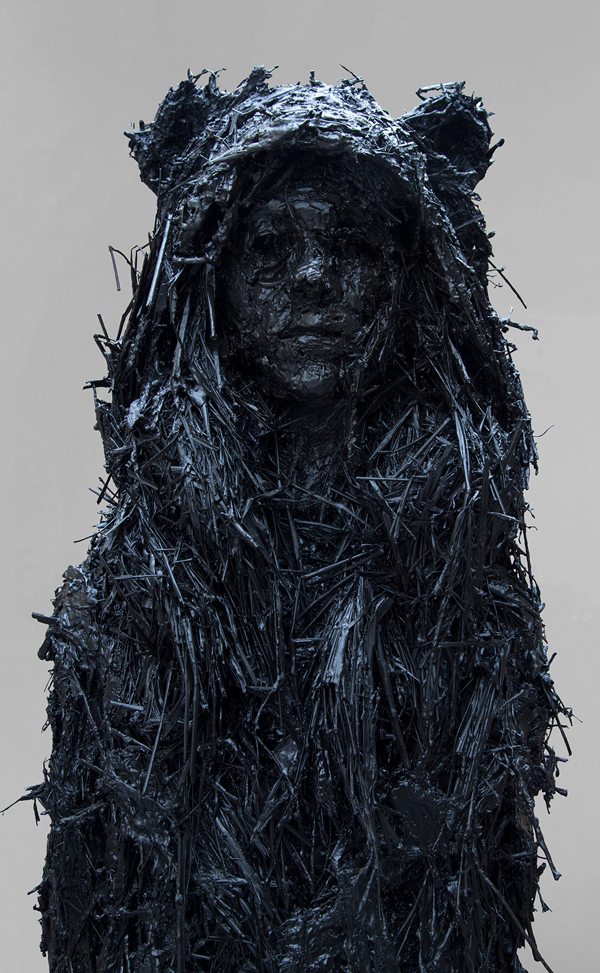 As you walk through her densely packed studio, a former coffee-packing facility in Peckham, you have the sense that you may just have interrupted these creatures midway through an emotionally fierce restaging of A Midsummer Night’s Dream or an adaptation of George Orwell’s classic fable, Human–Animal Farm. Hicks has something of the knack of Pygmalion; her works are so vivid, there’s a suspicion that if you watch them for long enough they’ll be forced to betray the fact that they’re actually alive – they can only hold their breath and hide their fleshly reality for so long.

Though she was born and grew up in London, only absenting herself for a ten-year sojourn in the Cumbrian hills, animals of a kind often associated with the farmyard are and have always been an important part of her life. Horses, chickens, ducks, sheep, dogs and even a donkey have been companions. A smelly pig’s skull, found by chance while out walking in the woods with her sculptor mother when she was a little girl, remains among the studio’s collection of animal fetish objects: “Looking at that skull, the beauty of a tusk in the socket and the emptiness of a socket, taught me how to look for beauty in menace,” Hicks has said. She was recently to be found on the streets of South London knocking on doors and anxiously showing neighbours pictures of her missing pet ferret, which said neighbours, staring at the photographs, steadfastly insisted was actually a cat (to add to the confusion, the ferret – now happily restored to its home – is called Bear). Today, above our heads in the rafters of the studio, nesting pigeons provide the mood music for our conversation.

Sculptors, Hicks says, are generally the sort of people who as children liked to stick their fingers in the sand or mud or feel a stream running over their hands. That’s certainly the sort of child she was. “Even now if I pick up a handful of straw I feel myself wanting to do something with it, shape it in some way,” she says. “My material of choice would be clay, which is as near as possible to mud.” 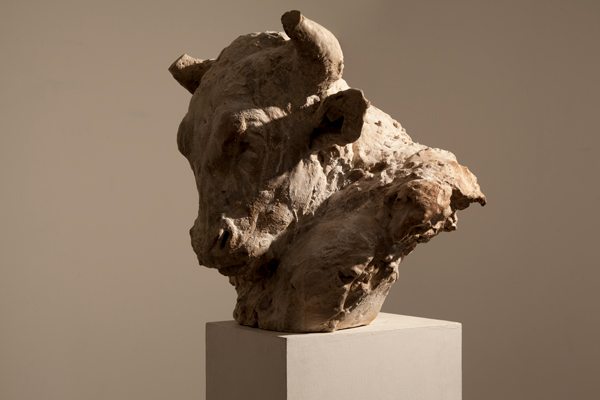 For the most part, she settles for plaster. Working with a really lovely piece of wood can be stressful since if you make a wrong move you can ruin it; plaster by contrast –“an inert nothing” – is restful. “It has absolutely no quality of its own. It’s nothing. It doesn’t smell, it has no colour, it’s nothing,” she explains, appreciatively. “It’s only what you add into it; it never interrupts.” The things she adds in, to give it texture and keep it crispy, include bits of newspaper, studio floor sweepings and, perhaps most characteristically, straw.

She used to dislike the next bit of the process – sending the plaster maquette away to a foundry to be turned it into a “finished” bronze – because it involved saying “this is done”. “There’s at least a six-week period where you don’t see the thing that you’ve finished. And all artists go on making the thing in their head. So you go on improving it in your mind.” And then one day there it would be – the fixed, ultimate form of the original, inchoate concept – and it might be a disappointment to her. Thankfully she’s now overcome her fear of the foundry and spends many happy days working there, with the result that there’s less of a gap between first thought and final expression.

Not that the uncast works are particularly fragile, she says. So why turn some of them into bronzes? “Practically speaking, if you buy a plaster it’s a massive responsibility. Whereas if you buy a bronze, not only is it pretty endlessly durable but, should the worst happen, there will be a mould and another one can be taken out of it.

“And you do have to pay the studio rent,” she adds. “You’ve got practical considerations. If I feel something’s worked, I can make an edition of six. I’m pretty pragmatic about the need to fund my studio practice. There is a mortgage, there’s a family.” And there are those pigeons, their fluttering and cooing suddenly reminds me – their home needs to be paid for and furnished too. 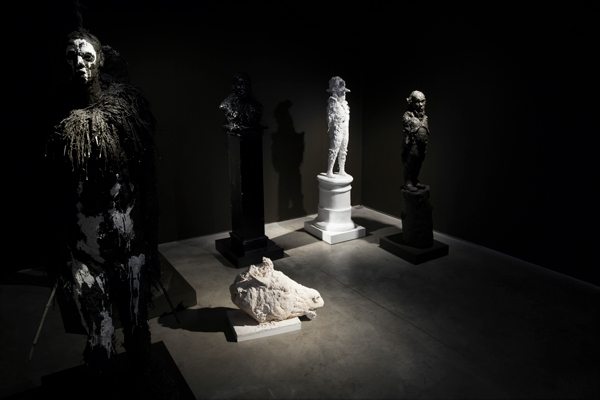 By the time she started her foundation course at Chelsea, Hicks knew exactly what she wanted to do. While her peers were experimenting with a variety of different media she was already entirely absorbed in sculpture. “I was totally focused,” she says. As a result both her style and her reputation were established by the time she was twenty-five.

She thinks this focus stemmed in part from her experience of dyslexia. “From the age when school started to become important my life was a process of working out how to cut out the things I didn’t do. Couldn’t do. And my solution was to do a thing I could do. OK: not getting the hang of this reading thing as fast as everyone else, so I’ll just draw. OK: not going to find maths possible, so I’ll make sculpture.” Growing up in a family of artists made it easier to chart that route, she adds.

If she’d taken longer to come to maturity or been a little slower to find her manner, she might have been a YBA. She crossed paths with Tracey Emin at college, and she’s only a handful of years older than Damien Hirst. Not that the Goldsmiths gang’s brand of conceptualism really spoke to her. “A lot of what the first wave of YBAs was doing was so alien to my way of thinking. For me the idea of conceptual art is a given. Why would you start without a concept? But I was obsessed with touch and matter; the whole thing was to get beyond the notion and work it into something that talks. I’m only really interested in things I’ve got to stand in front of, over, under, smell, touch, see. That’s where my interest lies. That’s my passion.” 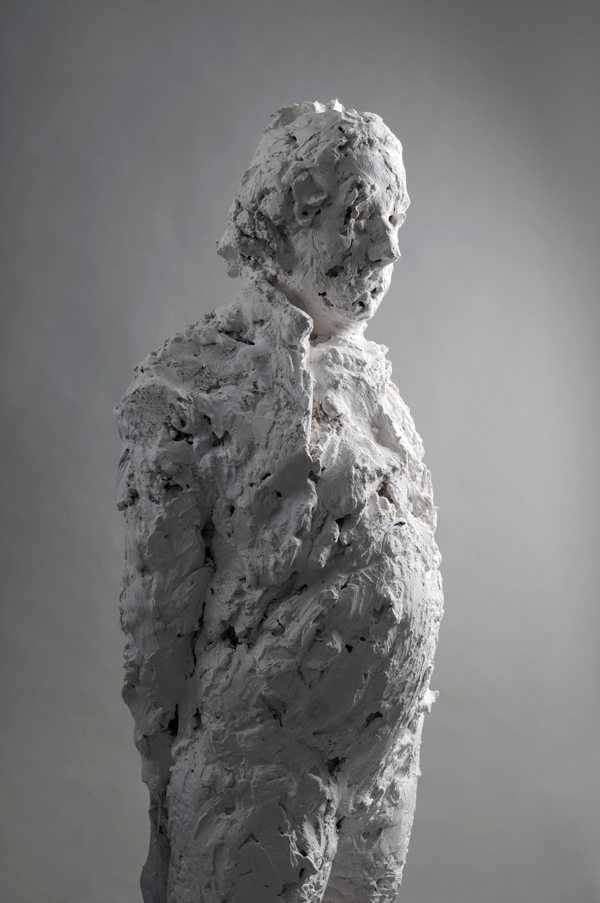 But she seems entirely sincere when she expresses her admiration and gratitude for the YBAs’ wider impact. “I think the way they changed people’s attitude to art, the art world, the place of artists, the necessaries of artists, the financial respect that’s come for art, is profound and wonderful.

“I’m thrilled the YBAs happened,” she concludes, “but it feels about as close to me as the film world. I’m passionately uninterested in celebrity, I’m interested in matter.” Besides which, she’s not very clubbable. Being part of the YBA gang would never have suited her personality. “I do work quite hard to remain apart,” she says.

She gave birth to her children, Bill and Edie, in her studio. “It just happened to be where I felt comfortable. There was no hippie philosophy behind it. I wish I could say there was but there wasn’t. I’m just a big fat coward and there was no way on earth I was going anywhere near a hospital.” That’s where she and her husband, Dan, lived anyway. 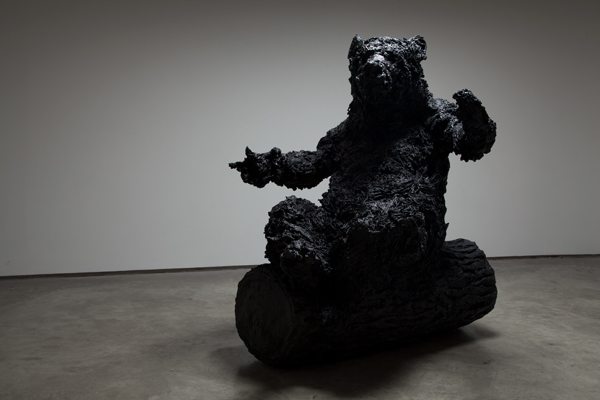 Giving birth to her children in the studio helped give birth to a lot of work. “I don’t think there’s anything useful to be done as an artist except talk honestly about where you are. The fact that I’d had children was the same as having a dog or a donkey or this or that childhood experience. I am where I am and what I do is talk about where I am. So of course it became a huge part of my work – it’s like being in an ocean of stuff, having a child.

“I got terribly sad a few years ago when I heard about some famous women sculptors telling young female artists that if they wanted to be taken seriously they mustn’t have children. It was back to an either/or situation. And that wounded me so deeply. It makes so many assumptions about motherhood and women in work. What discovering that level of love and tenacious energy does inside you is liberating, and it’s liberating in the studio too.”

Her children feature in sculptures such as Dressed for the Woods, which shows them draped in furs and adorned with magical tails and ears. “As a mum I was so bound up in stories like the Grimms’ fairy tales which are trying to prepare you for life. Longing to give them some sort of protection against difficult people at school and [advice on] how to deal with not being good at this or being really good at that – just longing to help really – took the form of giving them magical outfits for the woods.” 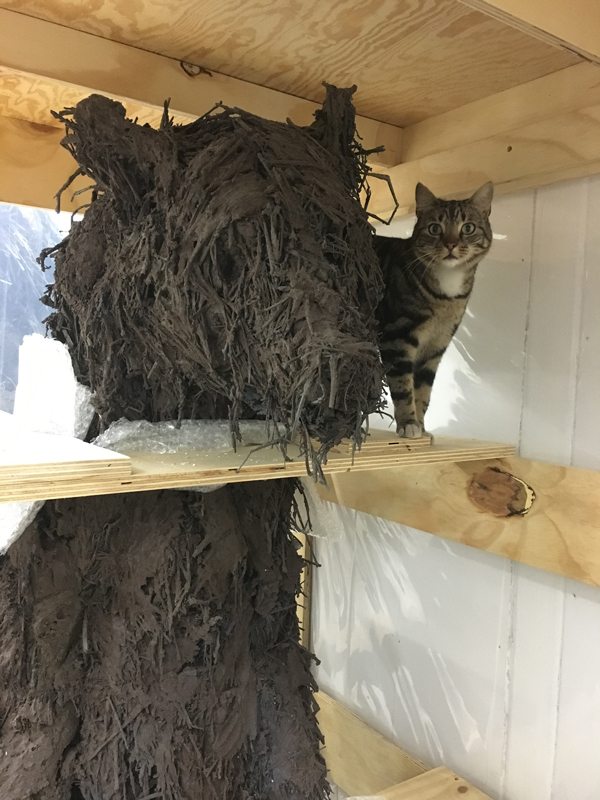 Beryl in the crate with Hypocrites, 2011

Of late she’s done a series of bears which she cheerfully confesses are self-portraits. “Now they’re older and they’re not children anymore but I still have this overwhelming urge to help and protect. And it’s not wanted, it’s not asked for, but it goes with being a mother, so I thought: What could I make them now? So I made myself as a bear, which is not much use to them but I’m still there.” Have Port Need Storm (2015) shows a great furry mammal with paws outstretched and beckoning to unseen figures; Dressed for the Woods II (2013) has a bear seated at the feet of the fur-draped male and female figures.

“As teenagers and young adults they go through shit and it’s painful and I make work about it because I make work about where I am.” Her studio is dotted with recent drawings of Edie, and there’s a wonderful sculpture from 2009 entitled Foal about Bill, and another from 2010 entitled Just How Fucking Difficult Do You Need To Make It For Yourself, Son, which may or may not have had something to do with something she wanted to say to Bill at the time. It’s a dilemma, she sighs. “It’s not entirely my story to tell, it’s their story to tell.”

When it comes to the new stories she has to tell, she points me to that circus horse – a self-portrait to stand alongside the myriad bears – and another work-in-progress entitled Willow Pattern, which began as a response to decorative toile de Jouy. “I can only talk about where I am,” she repeats. “Circumstances have changed.” Toile de Jouy typically features delightful scenes of simple pastoral pleasures but Hicks’s Willow Pattern centres on a tree that looks as though it has fallen under a curse in a fairytale. “It’s dripping black, there are filthy crows all over it,” she enthuses. “The world is magnificent but it’s nasty and it hurts. My way of dealing with it is to make sculpture.” 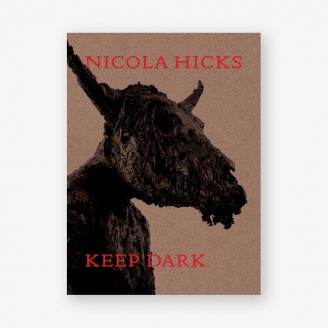