Stephanie Porrras introduces the fascinating story of art created in northern Europe during the Renaissance period, which saw political, social, economic and religious change on an unsurpassed scale.

What do you think of when you say the word Renaissance? In the popular imagination, the ‘Renaissance’ is synonymous with the rebirth of classical antiquity, the sculptures of Michelangelo and Mona Lisa’s enigmatic smile. But what if I told you that the first use of the word ‘Renaissance’ in any vernacular European language, was in German, not Italian?

In 1523, the Nuremberg artist Albrecht Dürer was working on a book on art making and artistic theory, a task that would occupy him the remainder of his life. He wrote:

“And for this reason, these same great masters have reinvigorated (regrown) in their art that which was not found for a thousand years, that was extinct, has been brought by God back to us (Und dorum pit ich dy selben grossen meister vunderteniglich, so doch for der jtzigen widererwaxsung in tawssen joren nix erfunden ist, das uns zw kumen sey dordurch solche kunst gar erloschen ist, sy wöllen jr gab, dy sy van gott entpfangen haben, uns mit teillen).” 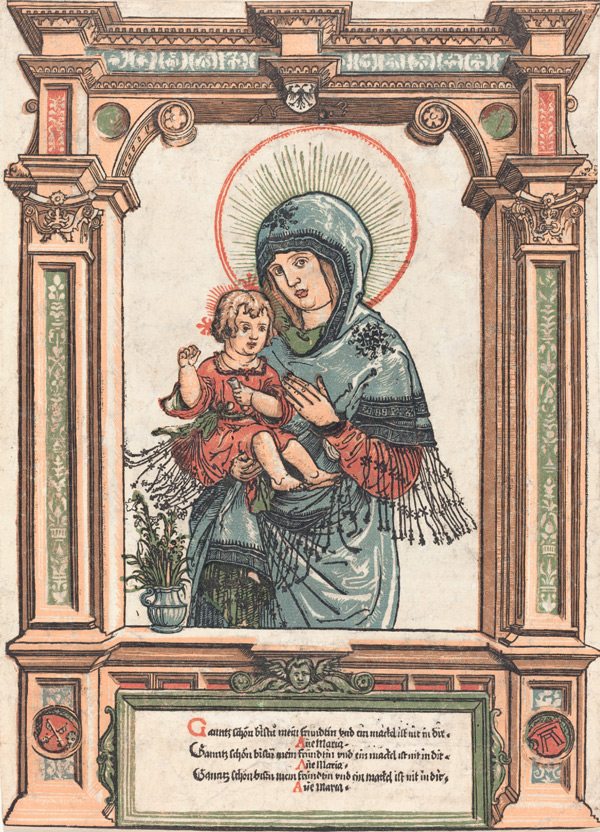 But what was the Renaissance for an artist working in Southern Germany around 1500? Was it the same for Dürer as it was for his artistic contemporaries working in Italy, or even in France or the Netherlands?

Rather than defining Renaissance art solely as that engaged in the resuscitation of the Greek and Roman past, this book considers how new forms of patronage, new types of art object, styles and subjects all came to define the Northern Renaissance. Brand-new artistic technologies, like printed images, enabled more and more people to own and interact with art. While religious authorities and wealthy nobles remained key patrons, art objects in this period were also bought by a broadening audience of consumers: urban elites and merchants. The rise of the ready-to-buy art market meant artists and artworks crisscrossed the continent – a noble patron like the Duke of Urbino could hire a court painter from Ghent, while a Spanish church could be outfitted with stained glass from Brussels. 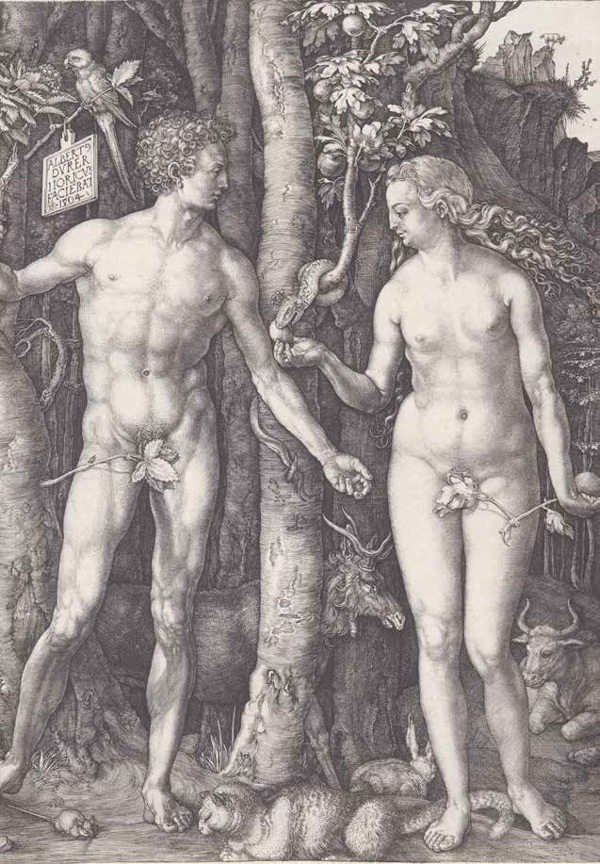 Where was the Northern Renaissance?

The Art of the Northern Renaissance: Courts, Commerce and Devotion explores what Renaissance art looked like North of the Alps – from the Baltic Sea to France, Austria to England. Like the Italian peninsula, this vast territory was composed of rival principalities – the Holy Roman Emperor controlled much of the German-speaking lands, while the Dukes of Burgundy held rich, urbanized territories in today’s Belgium and Netherlands. Without the overwhelming physical legacy of Greco-Roman antiquity felt in much of the Italian polities, the diverse lands North of the Alps each experienced the Renaissance as connected to developments in Italy, but also as a distinctly local phenomenon.

Our story starts around 1400, when noble courts from Prague to Paris built elaborate monuments of faith and temporal power, commissioning expensive and elaborate metalwork, textiles and tapestries. Each chapter covers approximately twenty to thirty years, chronologically introducing key artists, objects and sites under key themes. The book concludes around 1580, with the Council of Trent and the official launch of the Counter Reformation – the Catholic Church’s response to the impact of Protestant reform movements. This moment also saw the appearance of the very first written accounts of Northern artists’ lives and works. 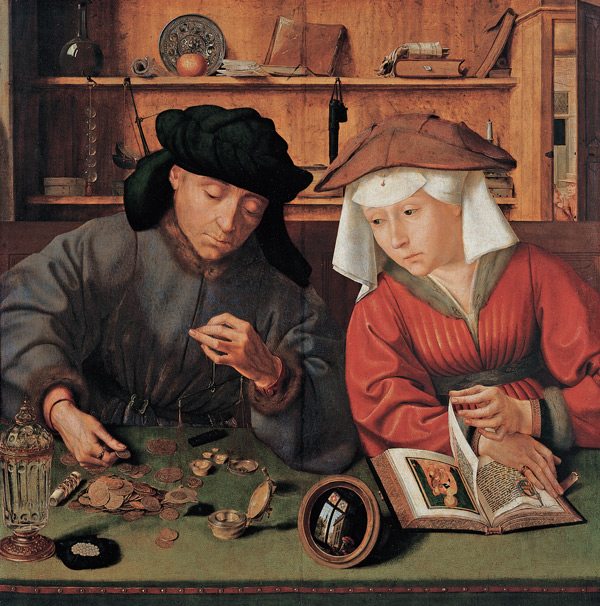 What counts as ‘art’?

Although today we tend to identify primarily the painters from this period – people like Jan van Eyck and Pieter Bruegel – many artists of the period worked in multiple media. The fifteenth century’s most esteemed and costly objects, things like metalwork and tapestry, are often displayed in separate galleries or even different museums to their more famous painted contemporaries. The book covers a wide range of objects: armor, tapestry, ceramics, prints, architecture, metalwork, sculpture and paintings. There are also discussions of ephemeral events, like jousting tournaments and banquets, where artists were employed to construct and coordinate elaborate temporary monuments. 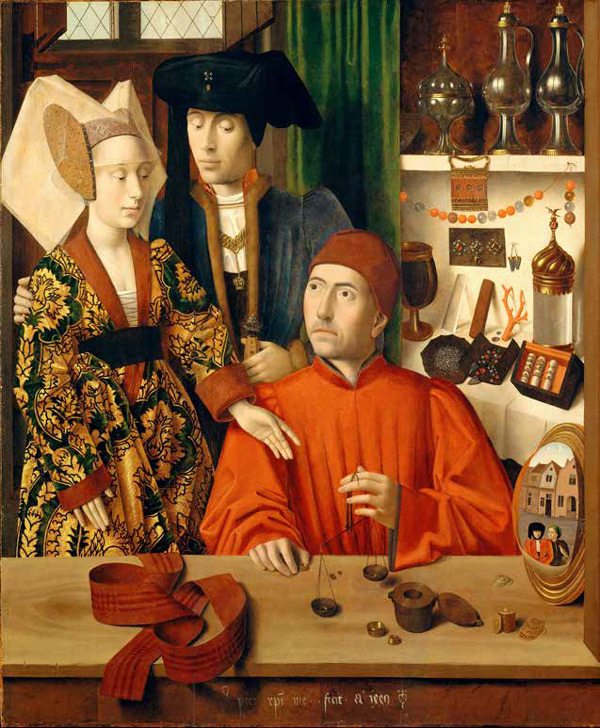 Petrus Christus, A Goldsmith in his Shop, 1449. Metropolitan Museum of Art, New York 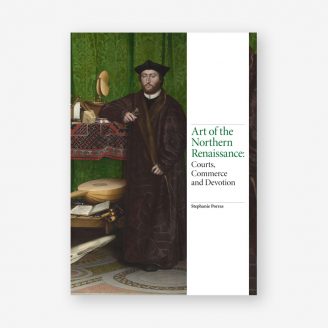 Art of the Northern Renaissance: Courts, Commerce and Devotion 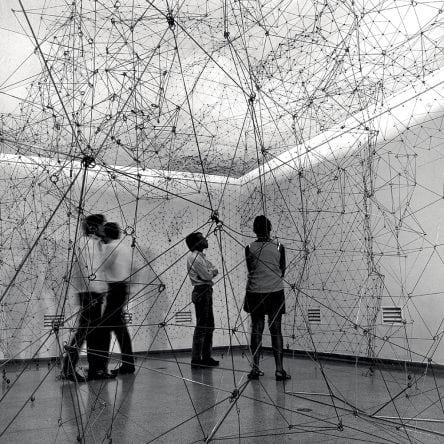 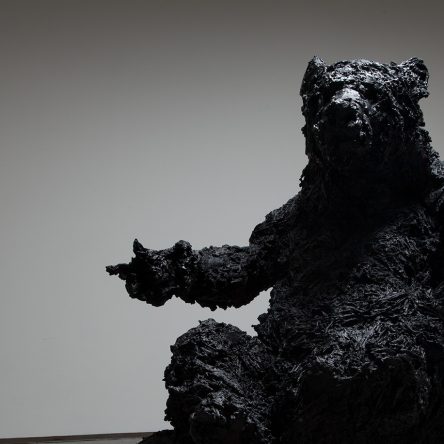 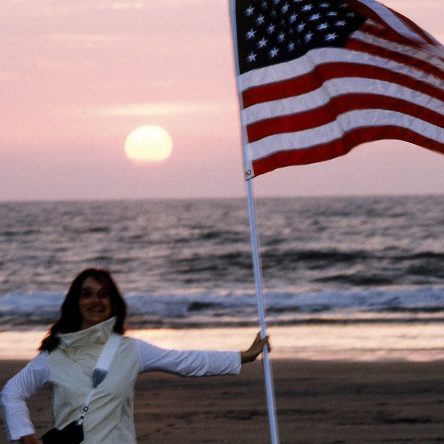