After more than a decade in print, Adrian Shaughnessy’s hugely successful book How to be a Graphic Designer Without Losing your Soul still resonates with young designers. We spoke to him to find out why…

When it was first published in 2005, books about the business of being a graphic designer (as opposed to books about graphic design itself) were few and far between. Although relatively young as an industry, graphic design underwent huge changes in the late 1980s and through the 1990s, and this had a profound effect on the way that designers work, bringing with it many new challenges.

How to be a Graphic Designer Without Losing your Soul was a refreshingly frank guide to the nitty-gritty of being a designer, written by someone who’d been through it all themselves. Accessible and credible, it provided much-needed practical advice which really resonated both students and those starting out in the industry – the sort of stuff that wasn’t being taught on graphic design courses at the time. Very much a book made for designers by designers, it sported an elegant design created by the then-newly formed Biblothèque (a group of three designers who met at North and Farrow Design). The book was an immediate success, and the revised edition was published five years later. Shaughnessy went on to publish Graphic Design: A User’s Manual, and then Studio Culture, which was the first title published under his and Tony Brook’s Unit Editions imprint.

As well writing, designing and publishing some very covetable design books, Adrian currently teaches at the Royal College of Art in London. We caught up with him to reflect on the book and consider its impact on subsequent generations of graphic designers.

When did you first have the idea for How to be a Graphic Designer? Did you sense that there was a need for this kind of book?

Back then I felt that there wasn’t enough discussion about the grubby bits of being a working designer. Interviews with designers tended to be about only the good bits, and I sensed that there was something missing in the discourse around design. How do you deal with rejection? How do get started on the career ladder when everyone tells you that you need experience? Are there any techniques to deal with difficult clients? These and other questions were the ones that I felt were being ignored, despite the fact that everyone has to contend with them – even the design superstars.

What (if anything) did you learn by making the book?

The most interesting thing I learned was not the thing I expected to learn. I learned to be a client. I had a budget to write and design the book. I decided not to design the book, and concentrate on writing it instead. I asked Bibliothèque to design it. They had only recently started up, and were full of energy and drive. We are still good friends (and I got them to design the second version) but I found it strangely unsettling to be a client. I saw things that designers do that alienate clients. I learned a lot from that – much more than I expected. I always say to students and young designers that they should try being a client at least once in their lives. It makes you reappraise the designer-client relationship.

Did your opinions about any of the topics covered in the book change throughout the process?

Not at the time of writing. I’d just come out of an intense 15-year period of being creative director of the studio I co-founded. The book was the sum total of what I’d learned during that period. In a way, it marked the end of my life as a professional graphic designer. Some of the things I wrote about then, I think differently about now, but I stand by most of what is in the book.

Were you surprised by any of the feedback?

Yes. It seems to have struck a chord with lots of people. I’ve met a few designers who claim to have been helped by it, and that is very gratifying – and surprising. I’ve also been struck by how successful it has been in America. I suppose it tells us that designers have the same hurdles and barriers to get over wherever they are. Of course the book has also had its detractors. Milton Glaser (a hero of mine) gave it a lukewarm review, and correctly pointed out a few shortcomings. It has also been criticised for not being political enough, and I accept that criticism. If I was writing it now, I’d reflect more on the politics of austerity that have made life more difficult for designers since I first wrote the book.

What changes did you make for the second edition?

Well, I sharpened it up, got rid of a few flabby sections, and did some new interviews. I also touched on social media – which didn’t get a mention in the first edition. Even so, as we live in a word of accelerated change, it’s a book that probably needs to be updated every couple of years. But it needs someone new to carry on the work. I’m no longer the person to do it.

Do you think it’s a myth that it’s hard to get designers to read?

Does every designer read? Of course not. Does every dentist read? Of course not. But many designers see reading as important, which make writing about design worthwhile – just so long as you don’t want to get rich doing it! I’m amazed at the amount and depth of reading done by my students at the RCA. It’s possible to be good visual designer and not be a reader. But all the best designers I know are also readers. 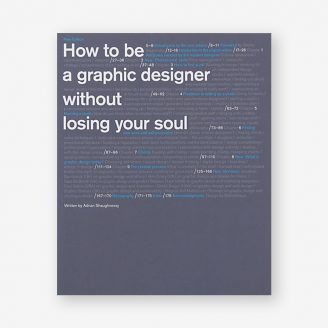 How to be a Graphic Designer Without Losing Your Soul, Second Edition