LKP: Congratulations on Oh Sh*t… What Now? How long did it take from the initial idea to handing over the final files?

Craig Oldham: Years. But not through incompetence, I wish to stress. Books are always slow-burners by their nature, but to be honest this project is a culmination of decades of experience, including those when I wasn’t a designer. I’ve always remained really sensitive to my years studying: cutting my finger-ends off with scalpels; spray-mount lungs; absolutely nervous and anxious as Hell thinking “Am I good enough?” and “Will I get a job?” and of course the inevitable “Oh Shit What Now?”. This book is the gathering of those experiences, those shared anecdotes and wisdom, so complaining them (let alone remembering them) took some time, though it was quickened by my ‘relaxed’ writing style (which is a nice way of saying “tries to be conversational and daft” really). Its design however took less time as we’d set out our stall early—wanting it to be purely typographic and further indulge in my adoration of fluoro and beermat—so that unfolded quicker. 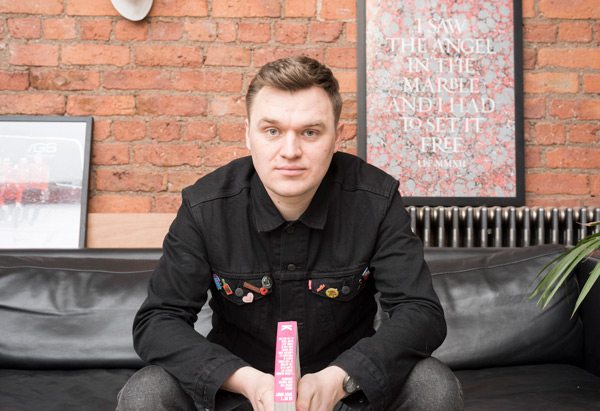 Craig Oldham in his studio (photography by Ivan Jones)

It’s a bit like a self-help book for graphic designers, was it therapeutic to write it? Or scary to share so much personal information?

Haha. Chicken Soup for Creatives. It was like cheap therapy, actually. No, I jest. It’s all my opinions and experiences, put across as honestly and humanly as possible, but I wasn’t scared about that one bit. Being so open doesn’t worry me at all, as I can only be myself. My genuine aim with the book was to actually try and help fill a void of ‘real life’ advice and experiences as this was a common and shared frustration I was hearing from not only those trying to get into the industry, but designers working in it already. That didn’t make me feel like I wanted to be more open with personal stuff at all, but it certainly gave me more confidence in the idea that I was doing the right thing and for the right reasons. I think there’s too many people hiding their personal journeys and experiences, not through malice necessarily, but instead opting for the safe and palatable version. Or worse, the thing that they feel they should be saying. And I got tired of hearing all that shit. So I wasn’t scared, I wanted to help, and if anything was that was the therapeutic bit.

Did any of your ideas about stuff change as you were writing the book? If so, can you give us an example?

My ideas change all the time. A really good friend of mine (who isn’t a designer) always says when I write things—whether a thing like this, an article, or a book—that he can’t wait for me to contradict myself! I imagine this will be his dream come true. In truth, it’s less about my ideas changing, but more the climate changing around them really. Internships (or placements as I call them) are one of those things. I believe that placements should never be done for free (and I mention this in the book) but didn’t really have space to wade into this as an issues in its own right, well, beyond the internship (or placement again) as a thing in itself—the whats, hows and whys etc. My ideas on what a designer should do and their wider role is another I guess… as I’m sure many people will know, I’m a pretty political person, but this book isn’t necessarily the place for that. Well…

What’s the best piece of advice given to you that you never followed?

That I never followed… hmmm. I’m honestly struggling to recall something. I’m the kinda person that trusts the person I am at the time when I make a decision. So I don’t dwell. That said I do remember being told many times that I should buy a house; learn to drive; learn to do digital myself; all things that I know I should do and am yet to. 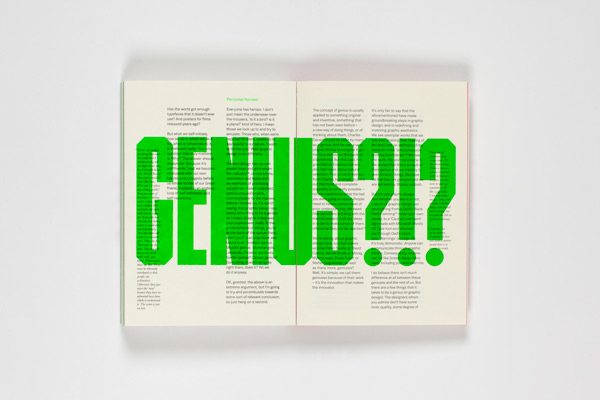 And what’s the worst piece of advice that you did?

Believing one should support the football club from the place in which they’re born.

For me, the most satisfying thing is that it’s almost a point of entry into any creative discipline. The more that designers are being used as thinkers means the more confidence the industry will become of transferring them into other areas (and not all necessarily viewed as creative) and that could be really exciting. The most frustration, paradoxically somewhat, is that we don’t have to like our work for it to work. Things do not necessarily have to conform to a set ‘industry standard’ of ‘good’ in order to perform their intended function. It took me a while to get my head around that, that I don’t have to like it for it to work, and I think a lot of designers can still forget that and it becomes a source of frustration for them, me, us all. 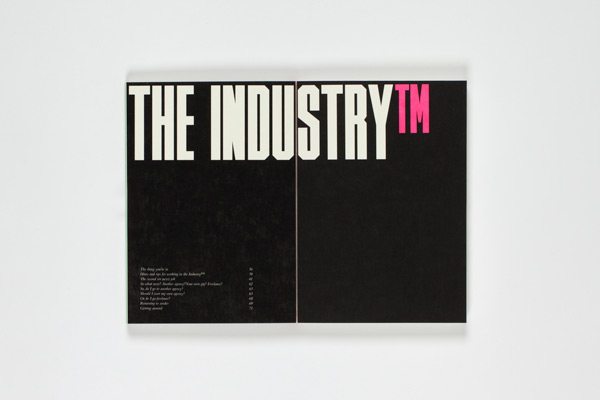 There’s a distinction to be drawn on what constitutes an opinion, and wading in actually. Much of this actually overlaps with my answer to the last question (that you don’t have to like it for it to work) but to be honest it was more my frustration with it. I think it’s great for designers to have opinions and to discuss them with others but I don’t see why it only has to be about things they do for a living or as a professional. There’s a lot of designers who only seem to talk about design, and the things design does in and out of their day (like branding) and that was more what I was getting at. Why not voice opinions on wider issues and interests, share other opinions rather than filling some sort of role. There’s also all the sheer bile and vitriol that comes out from designers (particularly when it comes to branding) on branding, and the shame about that is it’s like being stuck in a boys toilet. That reflects on the industry. And that kind of opinion sharing isn’t good for anyone. (Big thanks for perpetuating the ™ idea!)

If you could travel back in time and go and work for a day in any graphic design studio, which would you choose?

Jeeez… what a question. One I feel embarrassed answering as all of the studios and times I’ll name hereafter probably would NEVER have employed me! Ha. I’ve always admired what Tibor Kalman did at Colours that would be socially engaging on a global scale. Brownjohn too… though I imagine the ‘lifestyle‘ might be a heavy influence on that one. Gunta Stolzl at the Bauhaus (or Annie Albers for that matter) did unbelievable work in what must have been an incredible (albeit shamefully short) period at the Bauhaus. PushPin with Milton Glaser would probably top the list though. Their work (and namely Milton’s) continually operates in a commercial sense but retained its edge, individualism, and conceptual merit—particularly in a time when many designers were crusading for minimalism, modernism, and the whole Swiss-style-stuff. However, if I could have been involved in any studio environment it would probably be either be the ateliers of Paris in the uprising of 1968. 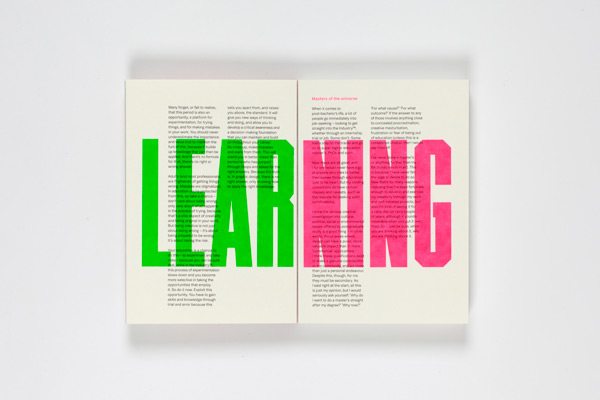 And if you could redesign one thing, what would you choose?

I’m on the ropes now… some questions these. Erm. Jee. I don’t know. I’m less interested in re-designing things than I am in designing or repurposing to be honest. But as you asked, I’d probably go for something that I thought was an incredibly missed opportunity: the book Apple did the other year for example… for a company with supposedly so much to say, it’s one of (if not the) dullest book I’ve ever seen.

Your Mum features a lot within the book – will she be receiving royalties for her words of wisdom?

Don’t tell her that… she’ll be after them! But seriously, my mum has cast the most indelible and important marks on me as a person. Without her raising me the way she did (a single mum, full-time job as a nurse, with my elder sister and brother too) I wouldn’t have had any opportunity that I’ve been luckily enough to receive. Even before that it’s thanks to Kerena (yes, my mam) that I owe they way she shaped my approach to even want to learn in the first place. So she deserves more than the royalties to be fair to her, as I owe her everything. (This is actually more soppy than the Soppy Bit in the actual book come to think of it!).

How’s your dog? Have you named him or her after a typeface or a footballer from the 1980s?

She’s called Aggie (Agatha if she’s naughty) and is a border terrier. Turned 1 just this month too. Named her after Agatha Christie as when we first saw her she an absolutely belting Poirot-esque tasche! And is currently dropping her toys at my feet as I type… so I better get off. 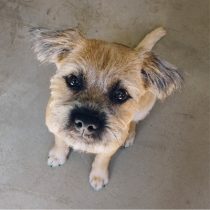 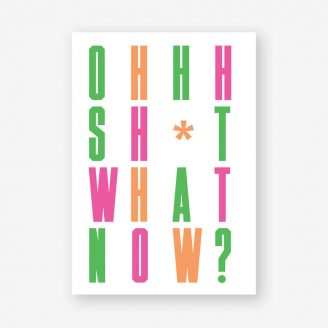