To celebrate the release of our new photography book, From Above: The Story of Aerial Photography, author Gemma Padley shares some of the incredible stories of this most colourful and surprising of histories.

Nowadays we’re used to seeing the world from above. Most of us will have used our smart phone camera to photograph out of the window of a plane, marveling at the clouds below, the tiny cars and web of roads, eager to capture the view for ourselves or to show to others. With the invention of and advances in drone camera technology, anyone can picture the earth from the sky and share the images instantly thanks to digital networks. But, of course, it wasn’t always the case. The story of aerial photography is one of ingenuity, passion, bravery, determination, daring and madness, even. Had it not been for the great innovators and adventurers of the nineteenth century who longed to see our planet from the air and would stop at nothing to make that dream a reality, we would not have the means to photograph the world from above that we take for granted today.

It all started with pioneering figures such as Frenchman Gaspard-Félix Tournachon, or Nadar as he was known. A journalist and caricaturist by trade and also an acclaimed portrait photographer, Nadar photographed his home city of Paris from a tethered balloon at an altitude of 1600ft. In 1858 he shared with the world views of Paris from above that had never been seen before; photos that are today widely accepted as the first aerial photographs. 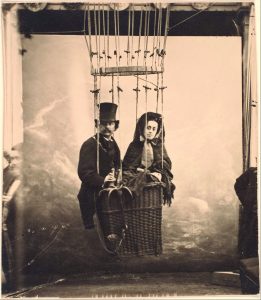 The Metropolitan Museum of Art, New York - Nadar, with his wife Ernestine, simulating a balloon flight

And there were other mad minds equally set on picturing the world in ways it hadn’t been shown before. In the US in 1860, James Wallace Black made a series of photographs from a hot air balloon that included a view of Boston, Massachusetts widely believed to be the first picture of the States from above. This image is also the world’s oldest surviving aerial photograph. 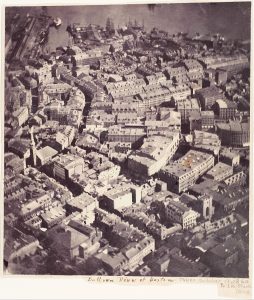 The Metropolitan Museum of Art, New York - Boston, as the Eagle and Wild Goose See It, by James Wallace Black, 1860

Experimentation was the buzzword of the day and photographing from a hot air balloon wasn’t the only way to capture aerial views. Early innovators tried camera-kites, biplanes and even pigeon cam.

The so-called ‘Captive Airship’ – a network of kites from which a camera was suspended – created by American George R. Lawrence at the turn of the century has been called the world’s first drone. Most famously Lawrence used his contraption to show the aftermath of the 1906 Californian earthquake that killed 3000 people. Aerial photography had already demonstrated it could capture devastation and calamity terrifyingly well.

Seeing the world from the air is one thing but to photograph it, let alone produce well-composed, striking images that both inform and take our breath away is another thing altogether. In the early decades of aerial photography, the goal was very much to record, show, discover, and enlighten, rather than purely to enthrall; although of course, there is no question that many of the aerial photographs produced in the early twentieth century were enthralling.

Take Swiss photographer Eduard Spelterini’s glass-plate images made during flights he made across Denmark, Cairo, Zurich, Johannesburg and elsewhere in the early 1900s. They are visually stunning, compositionally well thought-out, leading the eye off into the distance and capturing the 3D element of the landscape. But they are also undoubtedly informative. Most famously, in 1909, the so-called King of the Air took off from Chamonix in a hot air balloon, travelling a distance of 100 miles over the Swiss Alps. It was the first time such a crossing had been successfully made. Spelterini made photographic studies of the sprawling Alpine glaciers below, which environmentalists are using today to map the impact of climate change across the Mer de Glace glacier. 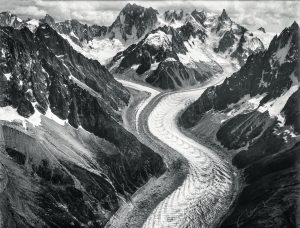 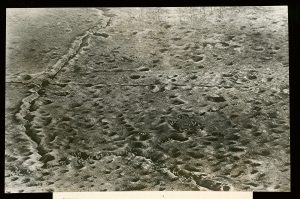 After World War II, aerial photography continued to be used for military purposes, and in the UK and US, it was commercialized by aerial-survey companies whose pilot-photographers would photograph urban and rural landscapes for all kinds of purposes including map-making, land-use studies, urban planning and social scientific research.

What’s interesting in the post-War years and to a greater extent into the 60s and 70s, is how the art side of aerial photography began to develop. The creation of compositionally beautiful images became an increasingly important factor.

Environmental concerns for our planet were never far away either. One of the most famous aerial photography pioneers and chroniclers of our changing planet is Yann Arthus-Bertrand. The Frenchman, who is today known for being an environmentalist and activist as much as an image-maker, founded the world’s first aerial photography agency in 1991, and in 1994 began a project that would form the backbone of his legacy: a study of the state of the earth. Using helicopters and hot air balloons Arthus-Bertrand photographed in over 60 countries for his Earth from Above project, capturing many of the world’s most beautiful landscapes not only to show their splendour, but also and more importantly, to highlight pressing ecological concerns.

Today, aerial photography has been picked up and embraced by everyone, from photo enthusiasts to documentary photographers, and inevitably it can reveal horror and trauma as well as lift our spirits and carry us away in wonder. Kevin Frayer’s image depicting the plight of Rohingya refugees, George Rose and Josh Edelson’s depictions of the devastating Californian fires in 2017 and 2018 and Ammar Al Bushy’s photograph of the aftermath of bombing campaigns under the Assad regime in Syria are just a few sobering examples. 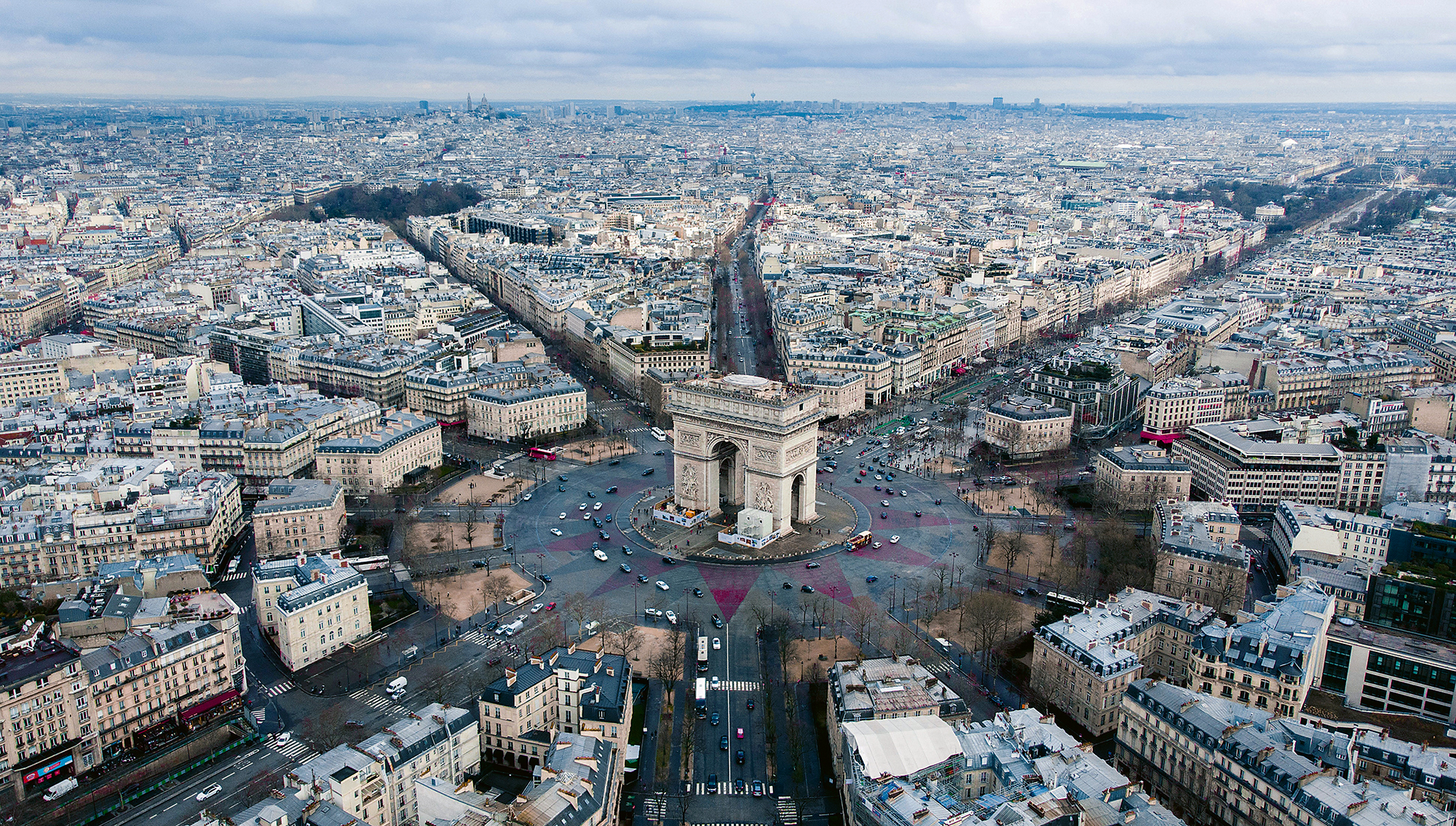 In a post-Google Earth age, aerial photography penetrates every area of our lives and is a powerful tool for us to communicate with each other in compelling ways, to celebrate the best of times and to learn from the worst of those. It plays to our insatiable desire to better understand the world around us, to bring places closer to us so we can not only admire them but also study them, and learn more about ourselves as humans and ultimately about this wonderful planet that we call home. 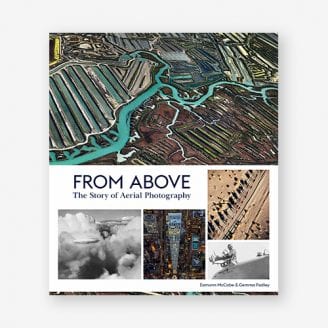