“Women have been creating art since antiquity, but for much of that time, they have been excluded, ignored and generally expunged from art history.” – Susie Hodge, from The Short Story of Women Artists

It takes little effort for most people to list famous male artists, even by those who do not practice or study art themselves. But what if when you ask people to name women artists over the centuries?

Here is a selection of five women artists you may not have heard of from The Short Story of Women Artists: A Pocket Guide to Key Breakthroughs, Movements, Works and Themes by Susie Hodge.

This book tells the more complete art history – from the breakthroughs that women have made in pushing for parity with male artists, to the important contributions made to otherwise male dominated artistic movements, and the forgotten and obscured artists who are now being rediscovered and reassessed. 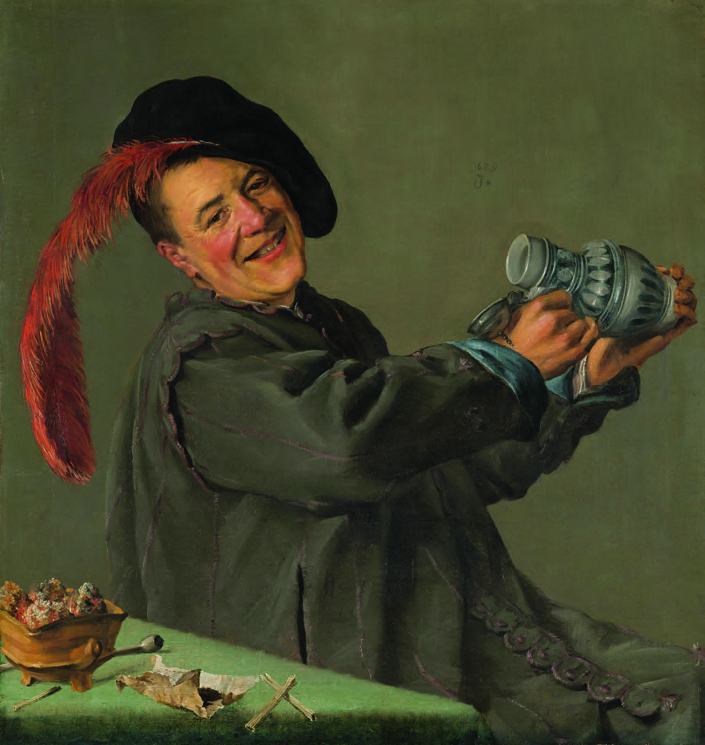 In 1633, Judith Leyster was the first female member of the Haarlem Guild of St Luke, one of only two women during that century to be accepted, a privilege that allowed her to establish her own workshop and hire apprentices. From early in her artistic career, Judith Leyster (1609–1660) became acclaimed in her native Haarlem and later also in Amsterdam.

With lively brushwork and an animated composition, ‘The Jolly Drinker’ depicts Peeckelhaeringh or Pekelharing, a well-known figure in seventeenth-century comic plays. Leyster depicts him as a character he often portrayed:

‘Kannenkijker’, or ‘jug-looker’, who came on stage at the end of a play and looked into an empty mug to indicate that the show was over. In Leyster’s portrayal of him, he is close to the picture plane, beaming and flushed, raising his beer mug to show viewers that his drink is finished. On the table in front of him is a small pipe and wrapped tobacco, and his clear enjoyment of smoking and drinking suggests both the pleasures of life and the dangers of excess. As did many Dutch paintings of the period, this one carries a moralizing message about the risk of indulgence and the transience of life.

Although Leyster was a celebrated artist during her life, after her death she was forgotten, and for years much of her work was wrongly attributed either to Frans Hals (1582–1666) or to her husband, the painter Jan Miense Molenaer (c.1610–1668). 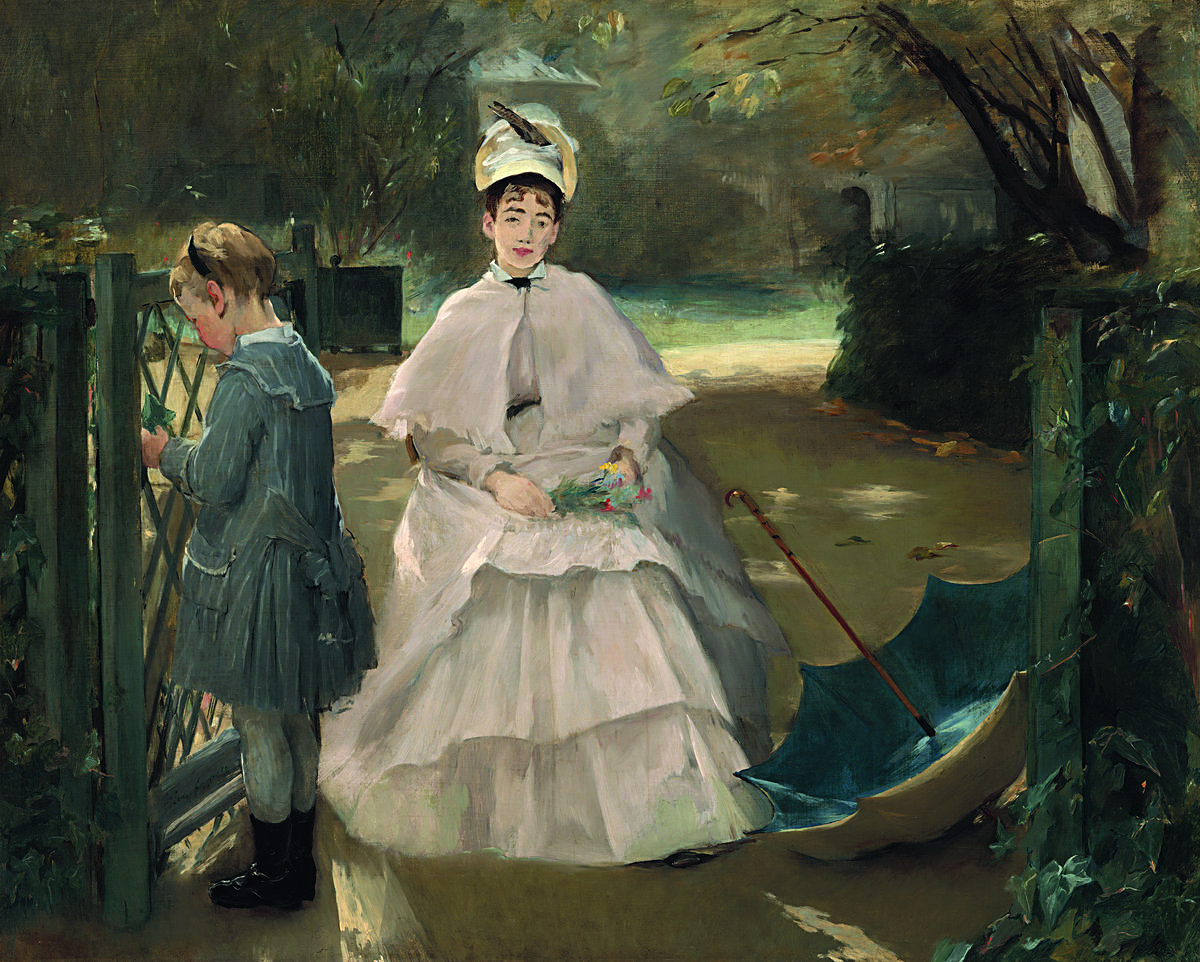 Eva Gonzalès (1849–1883) was one of many artists who died young through complications of childbirth. At the age of 16 she discovered her vocation, but as a woman she was prohibited from the École des Beaux-Arts. Instead, she studied art with the society painter Charles Chaplin, who ran an art studio in Paris specifically for women, and in 1869 she became the only acknowledged student of Édouard Manet.

Whether blood-related or strangers, a sisterhood between women is an unspoken bond of solidarity, rather like an underlying support network. Among women artists, this sisterhood has frequently been especially pronounced.

Alongside contemporaries such as Morisot, Mary Cassatt, Marie Bracquemond, Lee Krasner, Helen Frankenthaler, Elizabeth Siddal (1829–1862) and Emma Sandys (1843–1877), Eva Gonzalès encouraged one another within larger, male-dominated groups such as the Impressionists, Abstract Expressionists and Pre-Raphaelites. 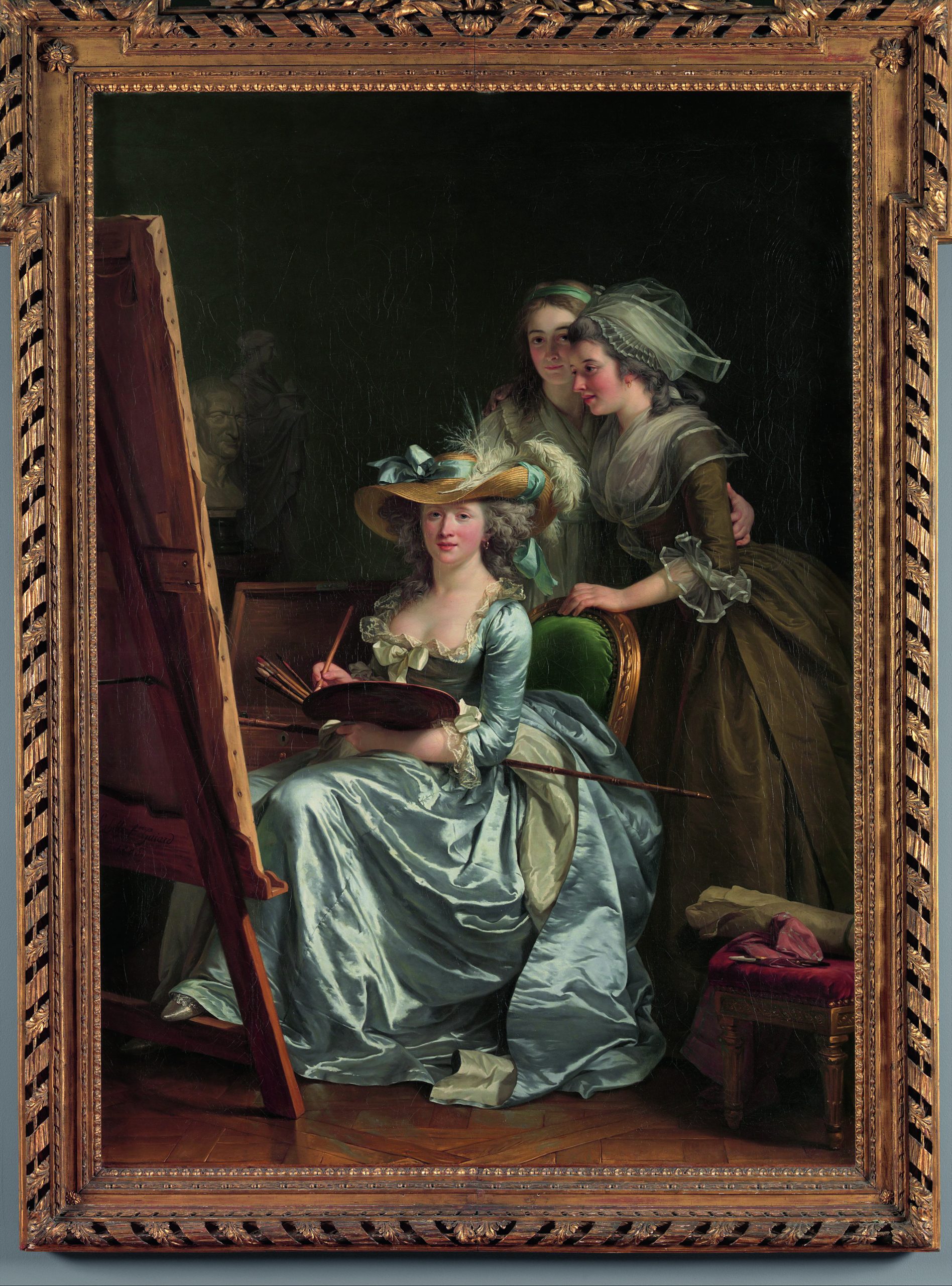 In 1783 Adélaïde Labille-Guiard (1749–1803) was admitted to the Académie Royale in Paris. At the time, the number of women artists allowed membership there was only four, and the French king had recently insisted that this number remain the same.

Probably in protest, Labille-Guiard produced this self-portrait with two of her female pupils. The life-sized, full-length painting of a fashionably dressed young woman at her easel teaching two younger women to paint was accepted for the annual Paris Salon, and helped to establish Labille-Guiard’s reputation. Aware that if the painting were selected, she would reach a huge number of viewers, she presented herself as both an accomplished artist and a fashionable young woman.

She had been teaching women to paint since 1780, and seen here are her favourite pupils, Marie-Gabrielle Capet (1761–1818) and Marie-Marguerite Carreaux de Rosemond (fl.1783–88). Demonstrating her expertise at rendering texture, including feathers, lace, satin, flesh, hair, taffeta, voile and gold, the painting also features statues of a Vestal Virgin and a bust of Labille-Guiard’s father in the shadowy background. The artist holds a palette, several brushes and a mahl stick, and looks directly at the viewer from behind her large canvas.

She was an advocate for the idea that women should receive the same opportunities as men to become great painters, and she was the first female artist to receive permission to set up a studio for herself and her students at the Louvre. 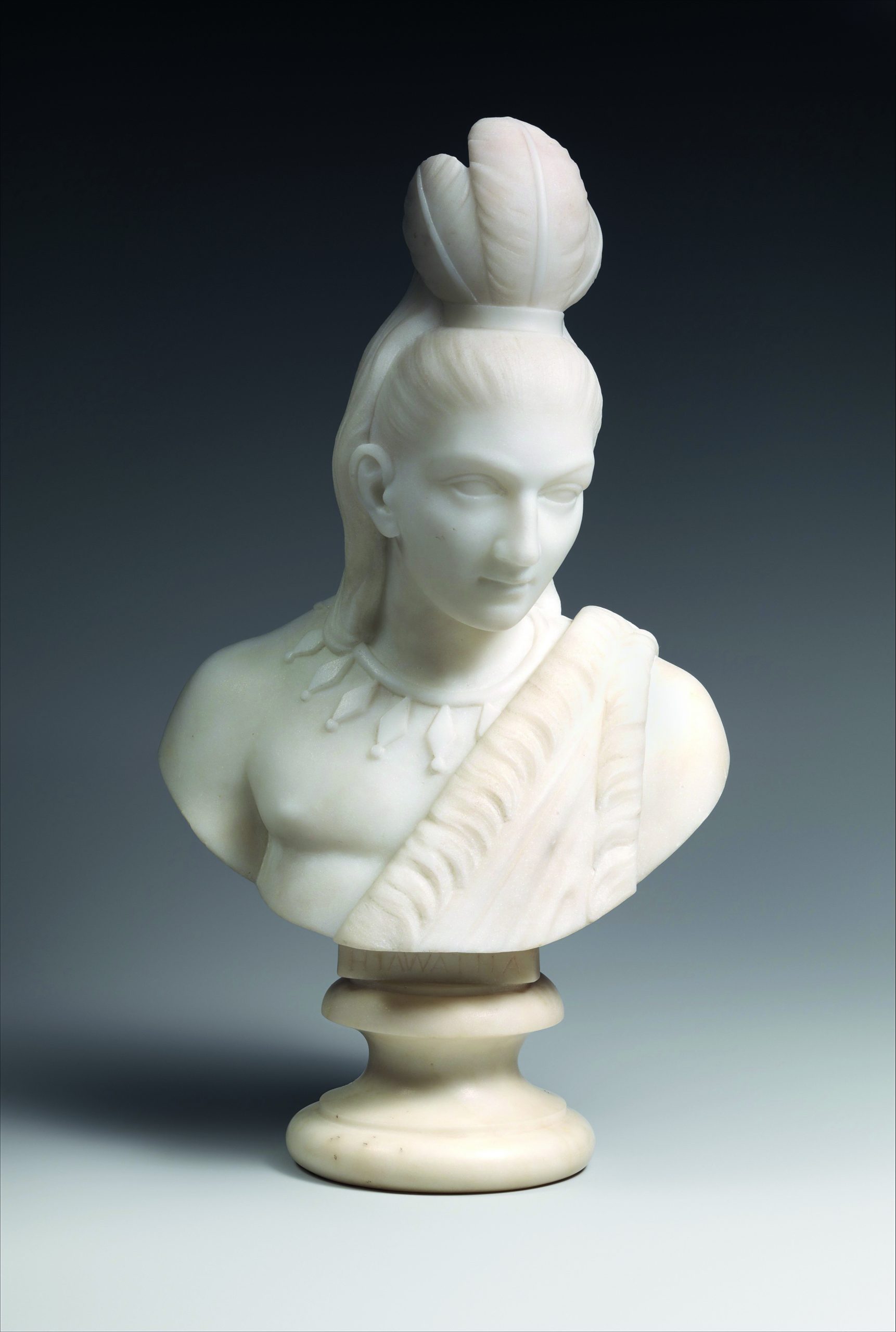 For part of her career, Lewis lived in Rome among a community of expatriate American and British women involved in the arts. During that time, between 1866 and 1872, she completed a series of marble sculptures on the theme of the star-crossed lovers Hiawatha and Minnehaha, from the epic poem The Song of Hiawatha (1855) by Henry Wadsworth Longfellow (1807–1882). Although based on a true character, Longfellow’s Hiawatha came from the same indigenous group as Lewis’s mother, and her method of carving amalgamated knowledge gleaned from growing up with her mother’s Chippewa people and the classical and Renaissance lessons she learned in Rome.

The classical influence can be seen opposite, particularly in the idealized shape of Hiawatha’s head and his elegant profile, as Lewis draws on the concept of the proud yet uncivilized noble savage. She also avoids the customary male artist’s representation of a nude but, in order to appeal to both sexes, she creates a man in native clothing. Unusually, but partly because of her poverty, she rarely employed Italian workmen while in Rome, completing most of her sculpture without assistance. 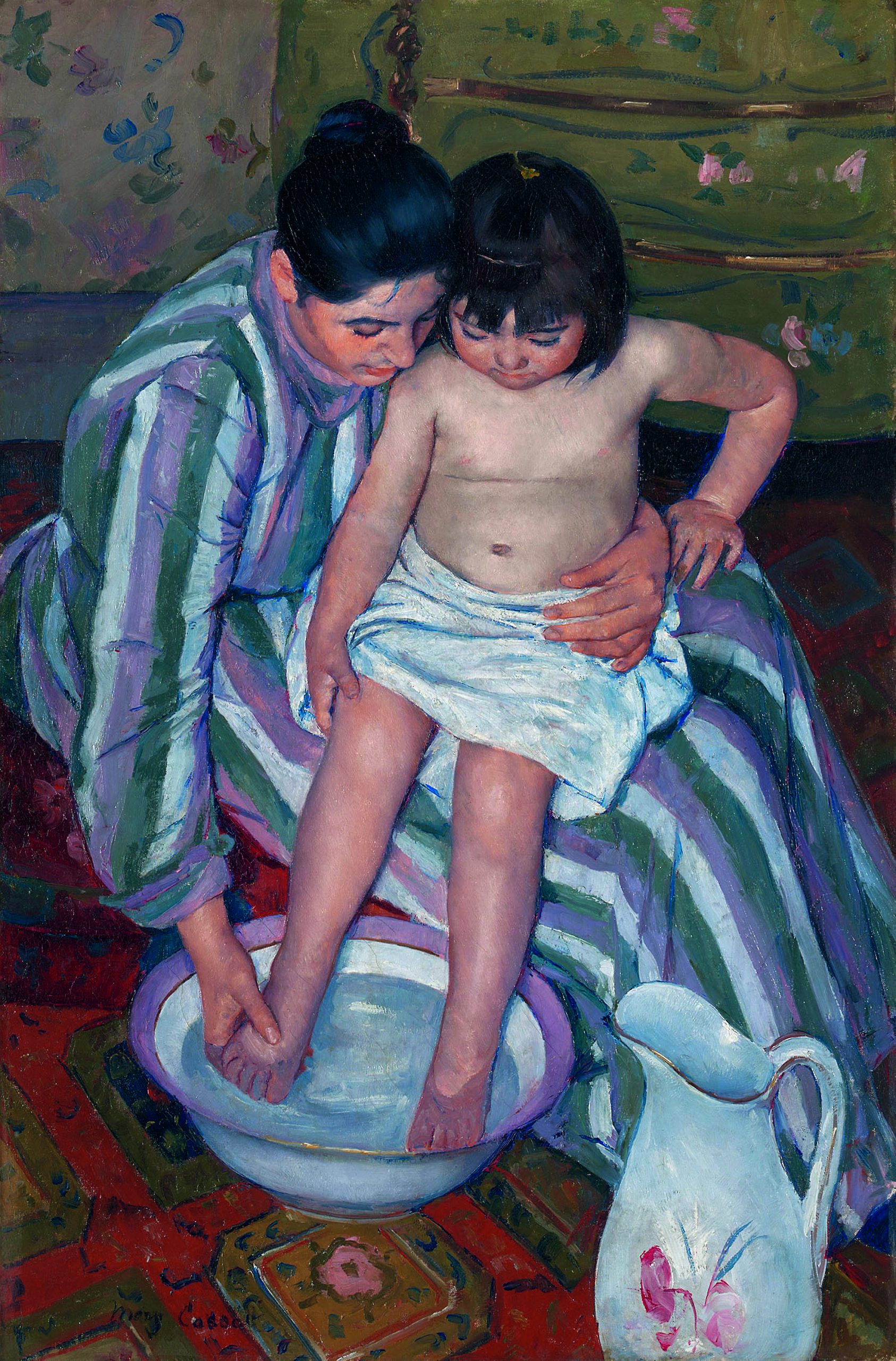 Described in 1894 by a critic as one of ‘les trois grandes dames’ of Impressionism, Pennsylvania-born Mary Cassatt (1844–1926) was the only American to work in France with the Impressionists. However, Cassatt had to fight her family’s strong opposition to her wish to become a professional painter.

She studied art for four years at the prestigious Pennsylvania Academy, then moved to Paris, where she trained with the painter and printmaker Charles Chaplin (1825–1891) and then with the history painter Thomas Couture (1815–1879). She worked in oils, pastels and print, and Edgar Degas (1834–1917) invited her to exhibit with the Impressionists in their independent exhibitions, beginning in 1879. Degas was a big influence on Cassatt, as were the relatively new introductions of photography and Japanese design; she was particularly taken with a large exhibition of Japanese prints she saw at the École des Beaux-Arts in Paris in 1890.

The painting shown here deals with Cassatt’s most common theme: mother and child in an everyday scene. As well as showing tenderness, the painting makes the woman tending her child the main subject, which conveys a sense of the modern world, where women were becoming slightly less downtrodden. The scene is depicted from above, and the angled composition, flattening effects, strong colours and striking patterns reflect elements of Japanese design and photographic ideas. There is a strong sense of realism in the way the mother holds the child firmly to wash her feet. Outlines and thickly layered paint on the figures differentiate them from the background.

In 1868 she left the United States for Europe, and in 1874, after travelling around Europe, she settled permanently in Paris and, also in that year, her work was accepted at the Salon. In 1877 she met Degas, who became a great friend and she participated in the Impressionist exhibitions of 1879, 1880, 1881 and 1886. 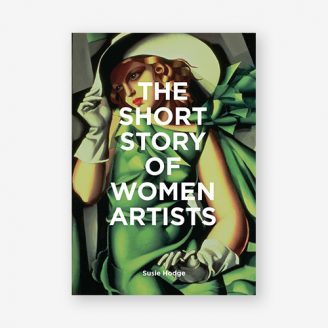 The Short Story of Women Artists