The 2nd of February marks 100 years since the publication of Ulysses in Paris by Shakespeare & Co. It also happens to be the anniversary of the author James Joyce’s birth in 1882 and the publication day for The World of James Joyce jigsaw puzzle.

Commissioning Editor Philip Contos details his favourite references from the puzzle below. This jigsaw puzzle brims with Joycean detail, but there’s no need to have read a single word of Joyce to enjoy piecing it together. Professor Joe Brooker’s accompanying text on the reverse of the puzzle poster guides you through the illustration and is the perfect entry point to the story for those who’ve always wanted to read it but who may have felt put off by its reputation as a dense and difficult text. As Joe says,

Joyce bids us reflect on the richness of the everyday experience and small details of life that we might take for granted. His many styles offer beauty, historical knowledge, social criticism and sheer laughter – for Ulysses is a comedy, and Joyce always wanted people to remember that.

For those who are familiar with the novel, there are plenty of details and references to surprise and delight, a few of which I’ll share here. 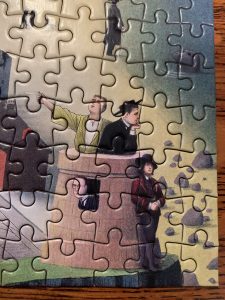 This is the opening line of Ulysses:

“Stately, plump Buck Mulligan came from the stairhead, bearing a bowl of lather on which a mirror and a razor lay crossed.”

In the bottom corner of the puzzle, along the coast of Dublin Bay, we see Stephen Dedalus, protagonist of A Portrait of the Artist as a Young Man, and Buck Mulligan standing atop the Martello Tower in which they live. These towers were originally defensive forts built mainly along the coast, affording the characters a view of the sea as Mulligan shaves his face and cheerfully blasphemes.

There are so many fantastic details packed into this little scene. First, we had the challenge of how to depict the same house at different times of day. Michael’s elegant solution was to show the house in the morning downstairs and in the night upstairs. 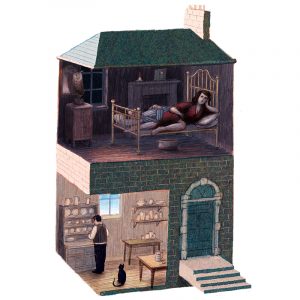 Here is our introduction to Bloom in the novel:

“Mr Leopold Bloom ate with relish the inner organs of beasts and fowls. He liked thick giblet soup, nutty gizzards, a stuffed roast heart, liverslices fried with crustcrumbs, fried hencods’ roes. Most of all he liked grilled mutton kidneys which gave to his palate a fine tang of faintly scented urine.

Kidneys were in his mind as he moved about the kitchen softly, righting her breakfast things on the humpy tray. Gelid light and air were in the kitchen but out of doors gentle summer morning everywhere. Made him feel a bit peckish.”

Not forgetting, of course, the Blooms’ cat, whose mew is rendered inimitably by Joyce:

—O, there you are, Mr Bloom said, turning from the fire.

The cat mewed in answer and stalked again stiffly round a leg of the table, mewing. Just how she stalks over my writingtable. Prr. Scratch my head. Prr.

Upstairs, at night, after he has returned in the small hours from his journey around Dublin, Bloom lies in bed next to his wife, Molly. They sleep head to toe, as we learn from Joyce’s elaborate description of Bloom entering their bed:

Along with this intimate detail, Michael has also included the “orangekeyed” chamberpot beneath the bed and an embalmed owl, a wedding present from Alderman John Hooper. Such details could be easily missed on a first reading of Ulysses, but by featuring them in the illustration we are able to appreciate the incredible richness of Joyce’s imagined world. 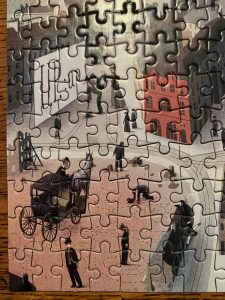 Another detail I love is on the other side of the puzzle, in the bottom left corner. The action of the novel is set on 16 June 1904; exactly 50 years later, writers Flann O’Brien, Patrick Kavanagh and friends decided to commemorate the first “Bloomsday” with a pilgrimage along the route of the novel. These days Bloomsday in Dublin involves elaborate reenactments, readings, and tours – this first celebration was so ramshackle, however, it had to be abandoned partway through as the participants were too drunk to continue.

Just above this scene, we also see the incensed Dennis Breen and the mysterious postcard bearing the message that has provoked his wrath: “U. p: up.” 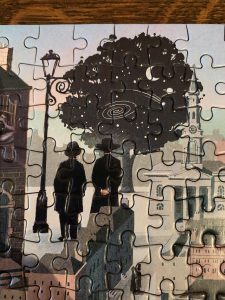 One of my absolute favourite lines in the whole novel also struck a chord with Michael. It describes the scene at the end of the night when Stephen departs from 7 Eccles Street. He and Bloom emerge from the house “into the penumbra of the garden”:

The heaventree of stars hung with humid nightblue fruit.

Joyce’s richly detailed text provides ample material for an illustrator, and Michael has used these to brilliant effect, punctuating the image with everyday objects that occur and recur over the course of the novel. Bloom’s potato is famous (a “talisman” as he calls it),  but there are plenty of other examples, like the bar of lemon soap that he picks up early in the novel, or the book Sweets of Sin. There are also cameos from characters and famous writers from outside Ulysses. Below we see the outsized Blazes Boylan buying outsized fruit at Thornton's to send to Molly Bloom in advance of their afternoon assignation; William Shakespeare perched above the National Library, where Stephen Dedalus debates with George Russell and John Eglinton; Leopold Bloom as his alter ego Henry Flower; and WB Yeats, John M. Synge and Maud Gonne outside the Abbey Theatre. 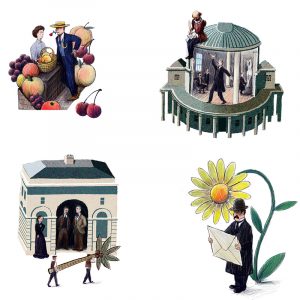 As a fan of Ulysses you can enjoy the surprise of discovering detail after detail in Michael’s beautiful illustration. Or you can just sort the pieces by colour and shape and enjoy the fantastic jigsaw puzzling experience afforded by The World of James Joyce. Philip Contos commissions gifts and games for Laurence King Publishing. He has been a member of the Charles Peake Ulysses Seminar, dedicated to line-by-line reading and analysis of Ulysses, since 2009.

Joseph Brooker is Professor of Modern Literature in the Department of English, Theatre and Creative Writing at Birkbeck, University of London, with a specialism in Modernism and Irish writers.

Michael Kirkham is an illustrator working internationally in the fields of advertising, editorial and design. He teaches on the illustration programme at Duncan of Jordanstone College of Art & Design, University of Dundee.

For further reading on Michael's work on this project please read this blog piece by Heart Agency.

To celebrate 100 years of Ulysses, we’re offering 25% off when purchased from the LKP website using the code JamesJoyce25.