Released in 1985, the American blockbuster Back to the Future told the story of a Californian teenager who, in a nuclear-fueled DeLorean automobile, travels back in time and gets stuck in 1955. Its entertainment value aside, the film’s international popularity corresponds to the Cold War in the early to mid-1980s – namely, a return to 1950s-era hostility between the United States and the Soviet Union. With détente in ruins by the end of 1979, mutual suspicion and antagonism replaced attempts at Soviet–American cooperation, leading to the most dangerous time of the Cold War since the early 1960s. The year 1983 proved to be particularly tense: the Soviets shot down a Korean civilian airliner that had accidentally entered its airspace, mistaking it for an American spy plane, killing 62 Americans; the Soviets suspected that Abel Archer 83, a joint US-NATO military exercise in Western Europe, was a prelude to a real invasion and came close to launching a pre-emptive nuclear strike; and the heated rhetoric of the 1950s returned, with Ronald Reagan referring to the Soviet Union as an ‘evil empire’. In another flashback, the arms race also heated up again, especially the competition for ever more powerful nuclear weapons and creative ways to deliver them.

The binaries and belligerence of the Cold War so prevalent in the 1950s thus again held currency in the 1980s, especially during the first half of the decade.

However, the 1980s was also the decade of postmodernism’s full emergence, and its ideas contradicted entrenched Cold War assumptions. For example, in 1979, French philosopher Jean-François Lyotard described ‘the postmodern condition’ which was predicated upon skepticism towards what he called ‘grand narratives’. Accordingly, big, monolithic ideas, like communism and capitalism, which had long attempted to make sense of world history through a singular perspective, were deemed insufficient to capture the messy and local complexity of experiences across the globe. Postmodernism insisted that there was no one ‘correct’ view of history; the days of stable reassuring binaries appeared to be over. By this logic, Lyotard seems to have been questioning the very idea of the Cold War at precisely the moment when it was again fearfully relevant.
These two world views were in conflict: the Cold War as the organizing principle behind contemporary global events versus the Cold War as an irrelevant concept that papered over ideological nuance and local specificities.

In other words, while the conflict reemerged with vigour around 1980, its defining armature was collapsing beneath its feet.

A number of artistic practices during this decade responded to the aforementioned confusion. Vito Acconci’s Instant House from 1980, for example, encapsulates the simultaneous relevance and irrelevance of the Cold War model during its last decade.
Approaching this work, viewers encounter a swing hanging in the gallery, surrounded by four sheets of wood resting on the ground, each decorated with an American flag. When a visitor sits on the swing, their weight activates a series of pulleys, which then draw the four sheets upright to create the ‘instant house’ of the title. This act leads to a big reveal: A Soviet flag decorates the outside of each piece of wood. While Acconci is certainly exploring the politics of engaged, active spectatorship, the work also presents the Cold War in postmodern terms.

When erected, the house posits a world sharply divided between inside and outside, us and them. But when the viewer steps off the swing, these divisions – along with the house itself – literally fall apart. 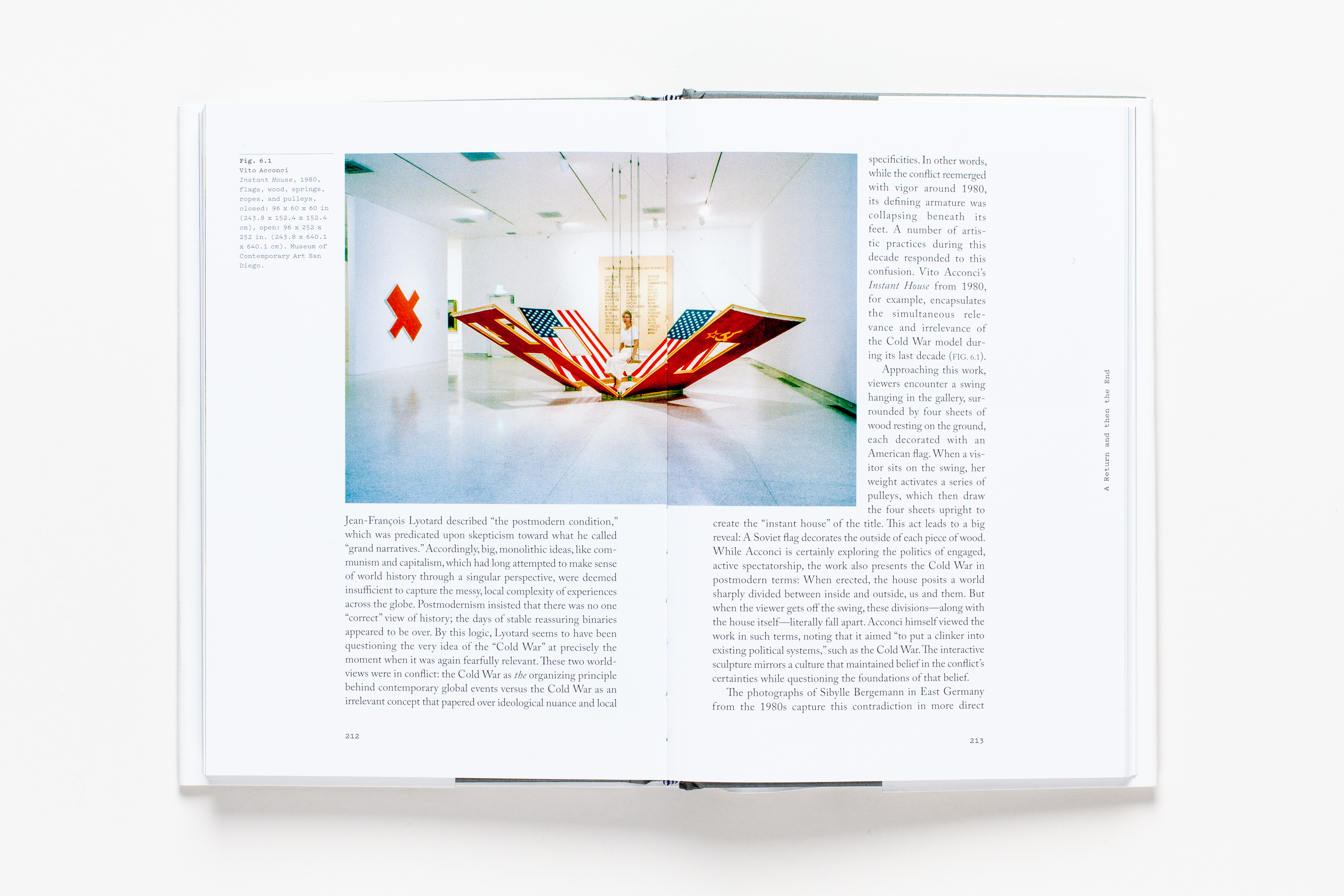 Acconci himself viewed the work in such terms, noting that it aimed ‘to put a clinker into existing political systems’ such as the Cold War. The interactive sculpture mirrors a culture that maintained belief in the conflict’s certainties while questioning the foundations of that belief.